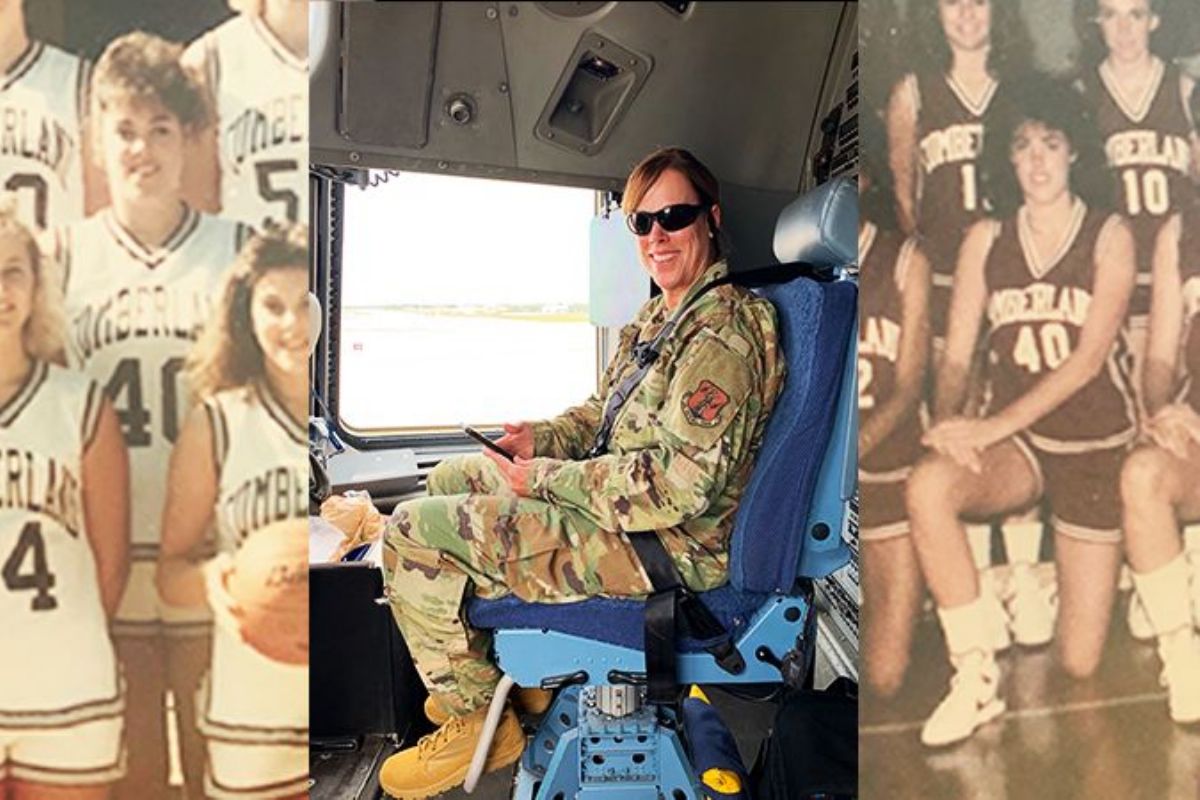 LEBANON, Tenn.—Former three-sport athlete and 1991 Cumberland alum, Lieutenant Colonel Denise Osborne, has given her life to selfless service in the military and as a firefighter.

Osborne, a 1986 graduate from McGavock High School in Nashville, chose to stay local for her college ball playing three sports at Cumberland: basketball, softball, and volleyball. She played two years of volleyball and softball but focused mainly on basketball where she played post for Coach Rick Reeves, now the head women’s basketball coach at the University of the Cumberlands, and Mitch Walters, now the Assistant Athletic Director at CU.

When asked about her skills on the court Coach Reeves said, “She was an excellent rebounder, she always hustled, and was a very good defender. She was extremely unselfish and wanted to see her team succeed.”

Coach Walters recalled a time during her freshman year in 1986, “Ozzy said, ‘Coach don’t leave me in the last two minutes of the game.’ She had to be out there the next couple of years,” Walters said with a chuckle. “She shot the elbows really well and that would open up the floor for her post moves. She had a nice jump hook that we taught her and she used it effectively.”

One moment that sticks with Osborne from her time at Cumberland was when the 1990 squad, her senior year, topped the 4th-ranked Belmont. Belmont held a 69-62 lead with just 22 ticks left when Cumberland went on an 8-0 run to beat them with a buzzer-beater three from Lacritia Sanson, formerly Lacritia Wilson and a member of CU Sports Hall of Fame, one of Osborne’s best friends to this day.

“Lacritia had a class that night and came breezing into the gym with her sneakers over her shoulder just before the game started. At the time of course we didn’t have a gym, so we were playing at the old Lebanon High gym and she went off and hit the buzzer-beater. It was a great moment.” Walters said.

Sanson recalled a moment that was special of her own about Osborne, “It was the end of our basketball season (their senior year), and we had to win our last game in order to go to the tournament.  I had an education class that night, and my professor would not let me miss. I was sick sitting in the dorm waiting on ‘the call.’  Back then we had one payphone at the end of the hall.  I heard the phone and took off running.  Coach Walters says, ‘You live to see another day, Osborne went off in the game!’  I am not sure how many points she had, but I was very grateful.  Good things happen with her around.”

Osborne finished up her schooling and earned a business degree from Cumberland in 1991. She took the next year off before enlisting in the Tennessee Air National Guard in 1993. She enlisted in the Aeromedical Evacuation Squadron where she was a flight medic. In 1999, she became a Charlotte firefighter and has been serving for 27 and 21 years, respectively.

Coach Reeves remarks, “She was always extremely unselfish,” shows up now in her characteristics to this day as she would serve continuously. Osborne would often spend long 24-28 hour shifts as a firefighter and give her life to the military on days when she was not at the station.

The Aeromedical Evacuation Squadrons are responsible for aiding military personnel that has become wounded or ill on the battlefield. They will initially give first-aid and if lifesaving surgery is needed they will fly the patients to the nearest hospital abroad.

The teams are made up of two nurses and three medical technicians that are considered the flight crew. The crews have to know all the medical expertise to help save lives as well as know everything about the aircraft they are on to perform their job at the fullest.

“I still remember the day that she left to go serve, and I was sad to see her go but very proud of her,” Sanson said.

In 1995, she left Nashville with a friend “on a limb,” but was able to find a new home in Charlotte, North Carolina. She was able to transfer over to the North Carolina Air National Guard and work in the same role. She has been there ever since.

“I ended up getting commissioned in the same squadron to an officer. I commissioned as a medical service core officer and I have been doing that ever since. I started as an A1C (Airman First Class) and went through the ranks to an O5 (Lieutenant Colonel),” she said.

Lt. Col. Osborne is currently on her ninth deployment. She has done four deployments to Washington D.C., two to Germany, and three to Afghanistan. She has some crazy stories about having to get soldiers out of battlefields.

She backed up her selfless lifestyle in 1999 when she became a Charlotte firefighter. “I have been doing that ever since I moved up to captain on the fire engine right now,” she said.

When asked about how the recent COVID-19 pandemic affected them she said, “Our call volume dropped because people were scared. We were trying to figure out as a department and a city on how to protect us.”

“The 9-1-1 system would spring all calls and they would determine if they were a possible COVID situation. We as the firefighters going in would have to use level three PPE and up. Googles, gowns, double gloves, N95 respirator masks, and so on.”

“We had a pretty high volume. We had a nursing home in the area that was hit pretty hard and it was sad because it was just rampant with the COVID.”

“Initially people that were calling were scared to go into the hospital because the last thing you want to do is go into the hospital. Once you do family can’t come in or anything, so they would try to stick it out at home. The hospitals weren’t full we never ran into any of that trouble.”

“Sometimes we would get a call back that the person you are giving CPR to has made it through and that is always exciting to go and talk them, but during this, we never really got any calls like that,” Osborne said. 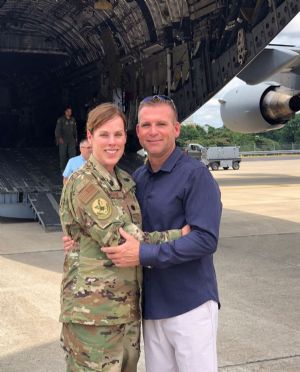 Lt. Col. Osborne and her husband Philip Gunter after her recent promotion to an O5.

She is keeping the military in her family as her step-sons are currently deployed as well, one is currently stationed in Japan and the other is starting out brand new and is on her unit.

Like her good friend, Sanson stated, "she is the kind of friend that always has your back.  She is quick to give praise to someone who does something well, but with that also comes a comment if you do something poorly."

We would like to give our praise Lt. Col. Denise Osborne for her endless hard work, 27 years of service in the military, and 21 years of service as a firefighter. Thank you for what you do.

For more Healthcare Hero Spotlights return on Fridays to check out another former Cumberland student-athletes story.