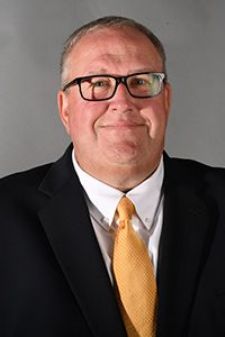 Rich Williams begins his ninth season as head golf coach and 11th with the Phoenix golf program in 2021-22. He also serves as the department's Game Operations Director, a title added during the summer of 2016.

During his tenure, Williams has coached five NAIA All-Americans--Austin Garrett in 2013-14, Ryan Botts in 2015-16, and Ana Laura Pages Preuss, Raquel Romero Valverde in 2018-19, and Isaac Walker in 2019-20--alongside 47 All-Mid-South Conference players. In the 2018-19 season, Cumberland captured both MSC Freshman of the Year awards with Maria Pilar Scenna for the women and Adrian Steeger on the men's side and this past season as Isaac Walker earned the honor.

In his first season as head coach, he led the Cumberland men to its first regular-season championship. CU won three times during 2013 and placed second in four other tournaments, earning Williams Mid-South Conference Coach of the Year honors.

Cumberland enjoyed a successful 2016-17 season, winning three tournaments including the MSC Championships, and placing second in two others to earn a spot in the NAIA Championships for the men. The women won a single tournament and took second in four others, securing the program's first-ever trip to the national tournament. Williams was honored with a Co-MSC Coach of the Year honor for his efforts.

The Franklin, Tenn., native has worked in a variety of roles within the golf industry, including as an assistant and head professional at Indian Hills Golf Club in Murfreesboro, The Little Course as Aspen Grove, The Polo Club in Boca Raton, Fla., and Gaylord Springs Golf Club in Nashville. He was an independent sales representative in the golf industry from 1998-2007.

In his Game Operations role, Williams oversees all aspects of set-up and breakdown for home athletic events at football, basketball, volleyball, soccer, wrestling, baseball, and softball, including staffing for ticketing and marketing, security for officials, locker rooms for visiting teams and scheduling for the Dallas Floyd Phoenix Arena.

Williams received his bachelor's in Psychology from Middle Tennessee in 1992 and is currently working on his master's in Public Service Management at Cumberland.