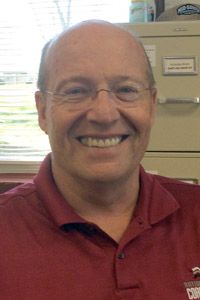 Jim Mike Ward begins his fourth year at Cumberland University as a Character Coach, helping coaches and student-athletes with resolving conflict and working through ethical and moral dilemmas that occur.

Ward is currently a regional pastor with Nations of Coaches, an organization that “strives to see coaches, their families and all of those whom they influence powerfully impacted for the glory of God.” He has served in the capacity with Nations of Coaches since 2011, training at the Chick-fil-A Leadership Center in Atlanta in 2013 and 2014.

Taken from the Nations of Coaches website, “The character coach is a servant and serves at the pleasure of the head coach. The overall objective is to help build the complete player (heart, body and mind of the student-athlete). A Character Coach strives to help coaches and players not only win on the court but also in life.

In 2011 he became Associate Pastor at South Parkersburg Baptist Church for one year before taking over as Lead Pastor at Pine Grove Baptist Church in Parkersburg. He and his wife of 43 years, the former Carolyn Hoag Ward of Huntington, W.Va., moved to middle Tennessee in 2015. The couple has two sons and three grandchildren, with son, Todd, and his two sons living in Franklin, Tenn.