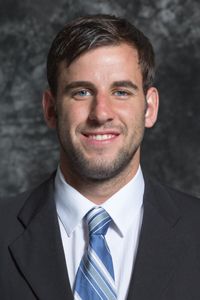 Adam Grant was named head coach of the Cumberland men's soccer program in December 2016 after serving two years as the women's head coach at CU. He will begin his 10th year with the Phoenix program in the 2021 season.

Grant has recorded a 39-22-7 record as the head coach of the men’s program. He has won back-to-back Coach of the Year Awards for the Mid-South Conference in 2017 and 2018.

In 2018, Grant led his team to a 10-5-4 record and 6-0-1 MSC record earning the program Mid-South Conference Regular Season Champions. The team had 8 MSC All-Conference players and the 2018 MSC Defensive Player of the Year, Bennett Strutz.

In Grant’s first season over the Cumberland Men’s Soccer program, they recorded a 15-3-2 record and beat Lindsey Wilson in the Mid-South Tournament Championship game in Double OT winning 3-2. The Phoenix reached the NAIA National Tournament Opening round. Grant coached the MSC Freshman of the Year, Tyler Watson, and had eight athletes deemed MSC All-Conference players.

Grant spent five years with the Cumberland women’s program, the last two as head coach, leading the Phoenix to the NAIA National Tournament and a victory in the NAIA Championship Opening Round in 2016. CU finished 13-5-2 in 2016 and registered a 22-14-2 record during his two years as head coach.

Cumberland reached the NAIA National Tournament in all three campaigns, winning matches in the NAIA Championship Opening Round each year to reach the Round of 16 and advancing to the quarterfinals for the first time in program history in 2014 in Orange Beach, Ala.

Grant, a Dublin, Ireland, native, graduated from Pobalscoil Neasain before playing three years at Lambuth University, earning First Team All-Conference honors as a freshman and Second Team All-Conference accolades as a junior. The Eagles won a conference championship his freshman season and he captained the 2010 club to a 12-5-2 overall mark.

He holds a “C” coaching license with the US Soccer Federation and a NSCAA Goalkeeping Level 1 and 2 license.

Grant graduated to Martin Methodist College to complete his coursework, earning his bachelor’s in Business Administration with an emphasis in Sports Management in May 2012. He received his master’s in Sport and Exercise Pedagogy from Cumberland in May 2014.