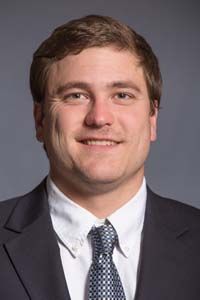 Former Cumberland quarterback Broc Loveless returned to Cumberland as a graduate assistant for the 2017 season and moved into a full-time capacity for the 2018 campaign, working with the team’s quarterbacks. In the Spring of 2019, Loveless was promoted to Offensive Coordinator while continuing to coach Quarterbacks and B-Backs in the 2019 season, Loveless is entering his fifth season.

Since being back at Cumberland, Loveless has coached First Team Mid-South Conference Bluegrass Division Running Back Telvin Rucker. In 2018, Rucker rushed for touchdowns and 691 yards on 142 carries. He also developed Wide Receiver Denarius Tolliver who garnered Second Team All Mid-South Conference in 2018. Tolliver posted 24 receptions for 503 yards and four touchdowns.

Prior to Loveless returning to his alma mater, he spent two seasons at NCAA Division III Millikin University in Decatur, Ill., working with defensive backs in 2015 and wide receivers in 2016. He served as the team’s video coordinator and assistant recruiting coordinator during his time with the Big Blue.

He developed an All-Conference receiver in Gerald Perry, who posted 60 catches for 828 yards and six touchdowns and led the league in receptions per game (7.0) and receiving yards per game (99.0) in conference games only last season.

The Spring Hill, Tenn., native led a huge comeback in his redshirt freshman year, with CU posting 21 fourth-quarter points in a 31-26 victory at West Virginia Tech. Loveless rushed 11 yards for a TD early in the period and hit DeJeay Woods for a 41-yard catch-and-run TD with 1:56 remaining to seal the victory. He finished the contest 13-of-25 passing for 184 yards and one TD also threw for 205 yards on 12-of-21 versus Campbellsville University that season.

Loveless rushed for 86 yards and one TD while throwing for another score in an overtime victory at Lindsey Wilson to end his sophomore campaign before becoming a co-starter with Gurchiek in his final two years.

Loveless earned his bachelor’s in Health and Human Performance with minors in Strength and Conditioning and Health from Cumberland in 2014. He also earned his master's degree in Sports Management at Cumberland in December 2018.