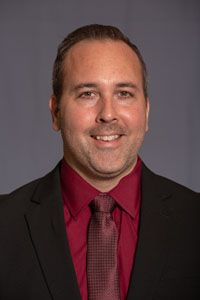 Scott Barbe was named the first head coach for men's volleyball at Cumberland University in November 2018. Barbe will be enterning his third season as head coach.

In his first season at Cumberland, the team went 11-24(8-5 MSC) playing much better toward the end of the season.

Barbe spent two seasons as the head coach for women’s volleyball at Ave Maria University, an NAIA institution just east of Naples, Fla., from 2014-16. The Gyrenes posted a 4-21 mark in his first season but improved to 13-19 in 2015, the best winning percentage in school history. Barbe left the program after the 2015 season to take care of aging family members.

He has 20-plus years of experience in volleyball as a head coach at the high school, collegiate and club levels. Barbe served as head coach at Warren Woods Tower High School in Warren, Mich., from 2010-13, winning MAC Division championships in his first two seasons at WWTHS while also earning Coach of the Year honors during those campaigns.

Barbe’s biggest foray into the sport came during eight years (2007-15) at owner, master coach and athletic program director for the Dynasty Volleyball Club in Macomb, Mich. He implemented program and development programs for ages 8-18, coordinated team activities for training, practices, matches, events and travel schedules and handled all business operations for the club. He was responsible for assembling teams and coaching staffs and was directly involved with the collegiate recruiting process for players in the club.

Barbe earned his bachelor’s in Business Administration from Walsh College in Troy, Mich., in 2000 and received his master’s in Management from Walsh in 2003.