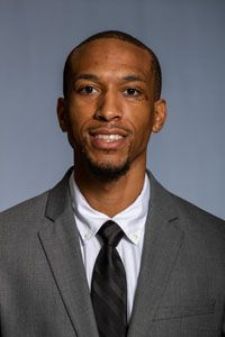 Mark Brown begins his third year as an assistant coach for the men’s basketball team in 2020-21.

Brown joined the staff in 2018 and has taken over the roles of recruiting coordinator, player development, film breakdown, and scouting. He also handles practice planning, oversees academics as well as handles many administrative duties from the men's basketball office.

The Nashville, Tenn., native, started his collegiate career at Freed-Hardeman University in Henderson, Tennessee. He played in 29 of the team's 32 games as a freshman averaging 4.6 points in 12 minutes per game. His sophomore season with the Lions his role increased as he started 12 games and saw action in all 33 games. He scored 256 points, 7.8 per game, 2.7 boards per game, and 1.7 assists.

After two seasons at FHU, Brown transferred to Shorter University for a short stint before closing out his college career at Cumberland. He started all 30 games for the Phoenix averaging 13.5 points per game, shooting 42.7% from the field and 38.2% from three. He ranked 21st in the NAIA in total three-point field goals made with 83.

Brown earned Second Team All-Mid-South Conference the one year he spent at Cumberland in 2015-16. He earned Mid-South Conference Player of the Week in November 2015 after leading CU to a victory over 11-ranked Martin Methodist, William Woods, and Oakland.

Brown played his high school ball at Station Camp High School where he was an all-district and all-county selection as a senior after averaging 14.5 points and 5.7 rebounds per game.  He shot 49.8 percent from the field and 39.9 percent from 3-point range during the season.

Brown earned his bachelor's of science at Cumberland in 2018 and is now currently pursuing his master's in sports management.