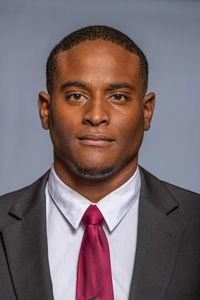 Kasey Smith begins his second year with the Cumberland staff as a defensive assistant , after spending the last two seasons at Kentucky Wesleyan.

Smith coached the defensive line and helped with special teams during his two seasons at KWC, calling signals on the sideline and controlling substitution and personnel changes last year. He also served at the team’s recruiting coordinator in 2017.

The Daytona Beach, Fla., native worked for 18 months as the associate head coach and defensive coordinator at Coral Springs Charter School in Florida in 2016-17, working with the defensive line and developing weekly game plans and practice scripts.

He served as a graduate assistant at Florida International for the 2014 and 2015 seasons, assisting with the defensive line, running the offensive scout team as well as breaking down opponent film and compiling scouting reports. He also helped with special teams, specifically punt and kickoff units. Six defensive linemen were drafted or signed as a free agent in the NFL during those two seasons.

During his tenure as a graduate assistant, Smith served as a community service liaison, scheduling visits to children hospitals, homeless shelters and visiting local elementary schools.

He spent two full calendar years in 2012 and 2013 at FIU as a quality control offensive assistant and football operations intern, working with quarterbacks and wide receivers, charting plays and breaking down opponent film along with compiling scouting reports. He also assisted with the football program’s community service outreach program in that role.

Smith played three seasons on the defensive line at Florida International, appearing in 25 total contests, including 13 games with five starts as a sophomore and nine outings as a freshman. He played in bowl games as a sophomore and junior and was part of the 2010 Sun Belt Conference championship team in 2010.

He earned Second Team All-State honors at Seabreeze High School in Daytona Beach, garnering Volusia County Defensive Player of the Year honors, ranking second on the team with 65 tackles and helping the Sandcrabs to an undefeated regular season and a regional playoff appearance. Smith was named the East Defensive MVP of the Central Florida All-Star Game after his senior year.

He earned his bachelor’s in Criminal Justice from FIU in August 2012 and received a master’s in Sports Management and Recreation from Florida International in July 2013.