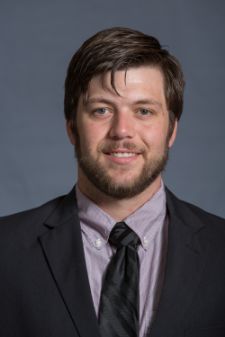 Former Cumberland baseball player and graduate assistant, Kyle Allen begins his third year as the Sports Information Director. He is responsible for a variety of professional tasks related to the planning, organization, operation, and management of the marketing, promotion, and sports information/media relations of the athletic department.

He and his staff are also responsible for the upkeep of the athletic website which includes updating bios and statistics for the more than 600 current student-athletes at Cumberland. The Sports Information Department staff, which consists of two graduate assistants, continues to add historical information found through research and sorting through old documents, including rosters, schedules, results, and awards.

While working as a graduate assistant in the athletic department at CU, Allen helped with class attendance, organization of athletic department activities including Leadership Training in August for all student-athletes, as well as game management and marketing efforts.

Between his time as a GA and taking on the role of SID at Cumberland, he spent a brief stint with the Nashville Sounds as an Stadium Operations Associate.

The Marietta, Ga., native was a four-year letterwinner under Hall of Fame coach Woody Hunt and was a freshman on the 2014 national championship team, collecting two doubles and one triple in just 14 at-bats in three starts that season.

He played in 20 contests as a sophomore, recording two doubles, one home run and four RBIs in 30 at-bats. His best offensive campaign was during his junior season, batting .252 with eight doubles, one homer, and 22 RBIs in 43 games. Allen posted three doubles, three home runs, and 10 RBIs with an on-base percentage of .376 in just 69 at-bats as a senior.

His primary duty for the squad was to provide a strong defensive presence behind the plate. Allen threw out nearly 50% of runners that tried to steal his senior season.

He was a three-year letterwinner at Wheeler High School in Marietta, garnering All-County honors as a junior and senior and Honorable Mention All-County as a sophomore for the Wildcats. Allen was named the team’s Defensive Player of the Year in each of his final two seasons.