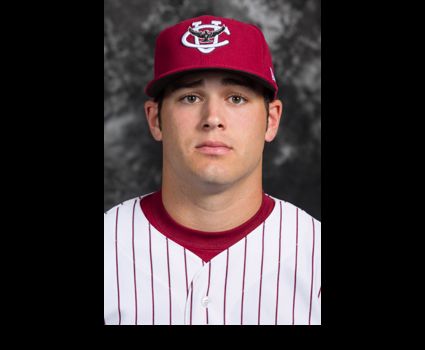 The Bulldogs (3-2) scored six times in the first two innings, two on Coleman’s double in the first inning, but the Trojans plated four runs in the fifth, cutting the lead to 6-5. Byrd answered with a triple in the bottom of the inning and scored on Coleman’s single to center.

Cumberland erupted for eight runs on eight hits in the seventh to end the game early. Hall blasted a two-run homer to rightcenter, the first round-tripper for the club this season, and CU had five consecutive hits before walks to Josciel Veras and Tyler Alford, the second one forcing in a run. Chris Hall’s two-run double to deep centerfield scored the final two runs of the contest.

Kevin P. Greene (2-0) tossed six innings to post the victory, allowing five runs on five hits. The righthander walked four and struck out three and only struggled in the one inning, walking a pair before giving up three straight hits and a sacrifice fly.

The Bulldogs got on the board in the first after a leadoff walk to Hall and a solid single to right by Byrd. With one out oleman sliced a double down the rightfield line, giving CU a 2-0 edge after one inning.

The Trojans cut the lead in half in the second thanks to a leadoff walk to Coffey and soft singles by Alex Senyshen and Kevin Fahy. Jake West followed with an RBI single to left, but Greene worked out of the jam with an inning-ending 6-4-3 doubleplay.

A pair of errors helped Cumberland add four more runs in the bottom of the inning, all unearned against Coffey.

Tyler Anderson started the frame with a single to left and Veras followed with a slow grounder to third, but West’s throw sailed over the first baseman’s head, moving the runners to second and third. Alford fisted a single just over the pitcher’s head, plating a run, and after a flyout by Hall, Byrd grounded a ball into the hole on the right side.

First baseman Senyshyn got to the grounder, but Coffey was late getting to the bag and Byrd beat the play. The throw from Senyshyn was low and got away, allowing a run to come across.

Sam Lind then grounded to the first baseman and his toss was high, though Coffey got the out, but the righthander did not pay attention to the runners. Pinch-runner Will Henderson scored from third and Byrd never slowed down, easily beating the throw to the plate, putting the Bulldogs ahead, 6-1.

Taylor scored four times in the fifth inning with the aid of two walks along with three hits.

Brian Moore and Grant Hendershot both walked with one out before a single to left from Danny Moorehead loaded the bases. Coffey’s single to right plated a run and Austin York’s double that hit the chalk down the rightfield line added two more. Senyshyn’s sacrifice fly to center made it a 6-5 ballgame after four-and-a-half innings.