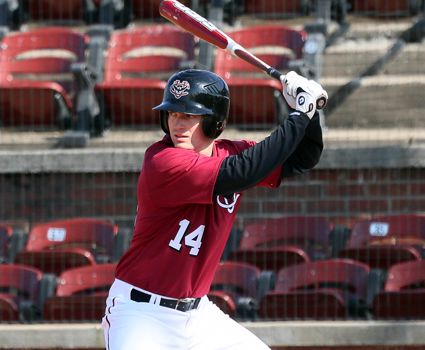 LEBANON, Tenn. – Georgia Gwinnett scored six runs in the first two innings, including a pair of RBIs from Antonio Allen and a solo homer by Phillip Bates, in the Grizzlies 8-5 victory over Cumberland on Tuesday in Lawrenceville, Ga.

Sam Lind and Josciel Veras each collected three hits for the Bulldogs (5-3) and Veras drove in a pair of runs, but a shaky first two innings from CU pitching opened the door for Georgia Gwinnett and they took advantage, plating six runs on six hits and the aid of one Cumberland error as well as five walks.

Chris Hall added two hits and Richie Seaton scored twice, but the shaky start was too much to overcome.

Kevin T. Greene (0-1) took the loss for the Bulldogs, allowing five runs on five hits with three walks in 1.1 innings of work. Jake Collier tossed 3.2 innings of relief, giving up an unearned run on four hits.

Brandon MacKinnon (1-0), the second of six GGC hurlers, picked up the victory, tossing 3.2 scoreless frames and allowing four hits with two walks and four strikeouts. Cumberland scored twice against Ryan Turner in the seventh inning and once each versus Jonathan Spitler and Zeke McGranahan in the eighth and ninth, respectively, but the tying run never made it to the plate.

Georgia Gwinnett started quickly, with William Paschal singling down the leftfield line with one out in the first inning. Payne followed with a single and Abbott’s two-out single to right plated the first run for the home team. Greene then walked three straight batters, forcing in a pair of runs and giving GGC a 3-0 lead after an inning of play.

Cumberland got a run back in the second when Seaton singled down the rightfield line, moved to second on a passed ball and scored on Tyler Alford’s double to left. But the Grizzles came right back with three more runs, starting with a solo homer to left by Bates.

Payne then doubled off the rightfield wall with one out, ending the day for Greene. Strickland reached on an error by Lind at second base, with Payne scoring on the play, opening the door for another big inning for GGC. Abbott and Pat Long both walked, loading the bases, before an infield single by Allen gave Georgia Gwinnett a 6-1 advantage.

That was the way it stayed until the seventh when both teams scored twice.

Lind led off with a walk and Ricky Coleman followed with a single, but Lind was picked off and Brady North grounded out, nearly killing the rally. Tyler Anderson’s single up the middle plated Coleman and Seaton reached on an error by Allen at second base before an RBI single to right by Veras made it a 6-3 game.

But the Grizzlies answered right back, with Garitt Church reaching on a throwing error by Alford after a bunt. Bates then singled and Payne drove in a run with a two-out single. Bates came across on the play on an error by Justin Byrd in centerfield, stretching the lead back to 8-3.

In the eighth CU’s Bryan Haney and Will Henderson both walked. Lind followed with an RBI double down the rightfield line, pushing across a run and putting runners on second and third with one out, but Coleman struck out and North grounded out to end the inning without cutting into the deficit any further.

Anderson struck out but reached first on a wild pitch to start the ninth and after a fielder’s choice, Seaton moved to second on a wild pitch. Veras then singled up the middle, plating a run, but Kyle Allen grounded out and Hall flied out to end the contest.