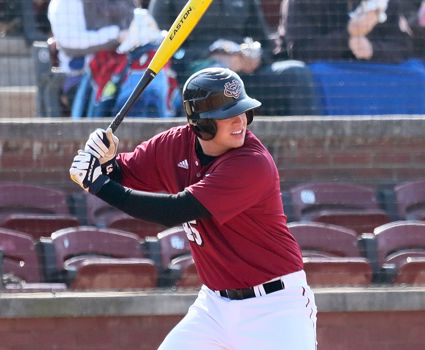 Justin Byrd, Josciel Veras and Tyler Alford all posted a pair of hits in the victory for Cumberland (6-3) and Veras and Alford each drove in two runs in a game of big innings. WVU Tech (0-1) plated six runs on six hits in the top of the fifth, pulling within 8-6, before the Bulldogs added five more in the bottom of the frame.

CU starter Kevin P. Greene (3-0) picked up the victory despite the shaky fifth inning, allowing six runs on six hits with two walks and six strikeouts. The righthander retired 10 straight batters before running into trouble in the fifth, with the Golden Bears hitting balls in just the right spot to collect six hits in the inning.

The two teams play a doubleheader Saturday starting at Noon.

The Bulldogs scored eight runs in the first inning on seven hits, jumping on the Golden Bears early.

Chris Hall and Byrd both singled to start the inning and Lind blooped a single into leftcenter. The ball got past centerfielder Zach Maynard, allowing Hall to score. A passed ball plated Byrd for a quick 2-0 edge.

Ricky Coleman then walked and Anderson reached on an infield single, lining a ball off the leg of third baseman Zach Sizemore and loading the bases. Richie Seaton walked, forcing in a run, and Veras chopped a double down the leftfield line, pushing across two more runs.

Alford then singled through the left side, scoring Seaton, and Veras came across on a sacrifice fly to right from Hall, as Cumberland sent 12 batters to the plate in the frame.

Greene labored through the first inning but then retired 10 straight Tech hitters before Jayson Sykora led off the fifth with a single to right, breaking up the no-hitter. That seemed to open the floodgates for Tech, with the Golden Bears collected six hits in the inning.

Tommy Weaver singled up the middle and Raul Torres lifted a single to center, loading the bases. Zach Maynard then dumped a soft liner down the leftfield line, plating a pair of runs, and Marc Culmer’s ground ball through the leftside scored another.

Zach Sizemore walked with one out before Austin Lucas’ single down the rightfield line, off the glove of Brady North, pushed across two more runs for WVU. Trevor Lam’s sacrifice fly to right made it an 8-6 game after four-and-a-half innings.

Cumberland answered with five runs in the bottom of the inning, starting with a one-out single by Alford and a walk to Will Henderson. Byrd was hit, loading the bases, and a pair of runs scored on wild pitches before an RBI double to rightcenter by Lind. Coleman then singled and stole second, setting up a sacrifice fly by North and a two-out RBI single to leftcenter from Anderson, giving the Bulldogs a 13-6 lead.

Veras singled to left to leadoff the sixth and scored on three straight wild pitches for a 14-6 advantage.

In the seventh Lind and North both singled and Anderson’s fourth hit of the game drove home the club’s final run of the contest.

Zeke Grissinger walked with one out in the ninth and scored on Sizemore’s double to rightcenter against CU lefthander Jackson White.