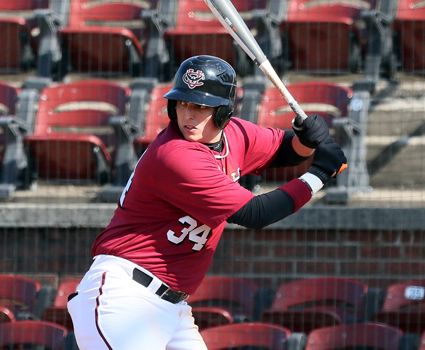 LEBANON, Tenn. – Cumberland scored 13 runs in the first inning of the opener but 25th-ranked Freed-Hardeman’s Dan Creighton scattered eight hits in a complete game in the second and the 10th-ranked Bulldogs and Lions split a doubleheader here Tuesday at Ernest L. Stockton Field-Woody Hunt Stadium.

Cumberland (9-4) plated 13 runs on nine hits and the aid of five FHU errors in the first inning of the opener, with the big blow a grand slam from Brady North. CU plated seven runs before the Lions (6-3) recorded an out and the Bulldogs finished with a 14-9 victory.

Sam Lind was 4-for-4 with three RBIs and two runs scored and Chris Hall and Justin Byrd both collected three hits. Byrd scored three times and Hall, Ricky Coleman and Tyler Anderson each had two runs scored as well.

FHU’s Garrett Ferguson hit a pair of two-run homers in the opener while Cole Veazey posted three hits and three RBIs and Lincoln Lakoff scored three times for the Lions.

Kevin T. Greene (1-1) picked up the victory in the first game, allowing two earned runs on seven hits in four innings. He walked one and struck out two.

Creighton (1-1) was the story in the second contest, with the lefthander giving up just one run with two walks and three strikeouts. He kept CU off-balance with an excellent breaking ball and worked out of jams in the third, sixth and seventh innings, as the Bulldogs stranded seven baserunners in the loss.

Connor Kohlscheen’s two-run single to center put the Lions ahead in the third inning and the game stayed that way until the bottom of the sixth, but not because both teams didn’t have opportunities. Freed-Hardeman left the bases loaded in the fourth and stranded a pair of runners in the fifth, as CU starter Jake Collier pitched well in the loss, working out of both jams.

Cumberland had a chance to tie the game in the sixth but got just one run. Byrd, Lind and Ricky Coleman all singled to start the frame, but North’s ground ball up the middle turned into an out at second base, allowing one run to score. Anderson then bounced into an inning-ending 6-4-3 doubleplay, sending the momentum back to the Lions dugout and they took advantage in the seventh.

Kyle Dearing reached on an error to start the inning and Pete Trollinger singled to right with one out. Byrd tried to throw out Dearing at third base, but his throw was high and late, allowing both runners to move into scoring position. Bob Seda then chopped a single past a drawn-in infield, giving FHU a 4-1 advantage. Two batters later Storm Bates singled to leftcenter, scoring the final run of the game.

Collier (0-2) allowed three earned runs in 6.1 innings of work, walking three and striking out nine while giving up only six hits.

Freed-Hardeman got a run in the first inning of the opener thanks to a pair of Bulldog errors. Dearing walked to leadoff and Trollinger reached on an error by shortstop Josciel Veras. Seda then bunted, but Greene’s throw was wide, pulling North off the bag at first and loading the bases.

Zach Quillian lined into a doubleplay, but Cole Veazey singled through the right side, plating a run for an early lead for the visitors.

The Bulldogs scored 13 times with nine hits and the aid of five FHU errors in the bottom of the inning.

Hall led off the inning with a single to center and yrd dumped a single into leftcenter. Lind then doubled down the leftfield line, plating both runners. Coleman reached on an infield single before a ground ball to third by Anderson. Lakoff made a nice backhanded play on the ball, but his throw to second pulled Veazey off the bag, loading the bases.

Richie Seaton then walked, forcing in a run, before North lined a ball just over the rightfield fence for a grand slam and a 7-1 CU advantage before an out had been recorded in the inning.

Veras reached on an error by Dearing at shortstop and Veras stole second before Tyler Alford popped up for the first out of the frame. Hall singled to right and stole second before an RBI single to right by Byrd. That ended the day for FHU starter Greg Young (3-1), who allowed 10 runs, six earned, on seven hits in one-third of an inning.

Lind singled to left against lefthanded reliever Eric Tompkins, plating another run, and Coleman blooped a single down the rightfield line, scoring another run. A throwing error by Seda moved the runners to second and third, and consecutive errors by Dearing allowed two runs to score. North’s sacrifice fly to right made it a 13-1 contest at the end of an inning.

FHU plated a pair of runs in the fourth when Veazey, Lakoff and Ferguson put together three straight singles to start the inning. Kohlschenn’s groundout plated a run and Dearing’s single to left scored another, cutting the CU lead to 13-3.

Free passes hurt the Bulldogs in the fifth, with Quillian earning a walk with one out before a two-run homer to left by Veazey. The Lions repeated the process with the next two batters, as Lakoff drew the walk and Ferguson lined a two-run home run just inside the leftfield foul pole, making it a 13-7 contest.

Ethan Mayberry also drew a free pass and Kohlscheen singled, but Dearing grounded into a 6-4-3 doubleplay to end the frame with no further damage.

Cumberland added a run in the bottom of the inning after leadoff singles from Byrd and Lind. A slow roller down the first base line from Anderson allowed Byrd to score for a 14-7 advantage.

In the seventh Lakoff walked with two outs and Ferguson belted his second two-run homer of the contest, this one to leftcenter, but Smith struck out four and surrendered just the one hit in two innings of relief.

Cumberland opens Mid-South Conference play this weekend with a three-game series at Georgetown College. The Bulldogs and Tigers play a single game at 2 p.m. Central Time on Friday and the doubleheader Saturday starts at 11 a.m.