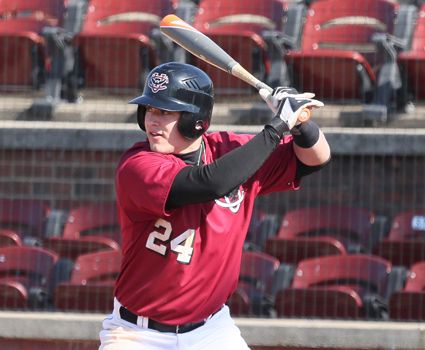 Shawnee State’s Derek Moore matched Gomez and then some in the pitcher’s duel, allowing just four hits and one run – a solo homer by Justin Byrd, the second batter of the game – with no walks in posting the victory.

The freshman righthander improved his mark to 4-0 on the season but it actually upped his ERA to 0.78. He allowed just five total baserunners in the game (one on an error) and Chris Hall’s sixth-inning double was the only other runner besides Byrd to reach second base.

Gomez struck out 10, his third straight double-digit strikeout performance, and gave up five hits through eight innings before running into trouble in the ninth. The lefthander walked four – two in the ninth – but tossed 133 pitches in the contest.

Byrd belted the fourth pitch of the game over the wall in rightcenter, his third homer of the season, but the Bulldogs did not have another hit until Brady North’s leadoff single in the fifth, as Moore set down 11 straight.

The Bears (12-9, 4-0 Mid-South) nearly tied the game in the third after Dustin Bickmeyer drew a leadoff walk and Brady Page reached on an error by Byrd in rightfield, but pinch-runner Mitchell Lendenski was thrown out at second on the play.

Page later stole second and tried to score on Daniel Katayama’s single to left, but Hall threw out the runner at the plate, keeping the Bulldogs (13-6, 2-2) in the short team.

Shawnee State knotted the contest in the top of the fifth when Bickmeyer singled to right with two outs. Lendenski stole second and third and scored on a single to center by Page.

Anderson reached on an error by Page at shortstop with one out in the eighth for CU, but pinch-runner Zach Cole was left stranded at first after a lineout by Richie Seaton and a popout from Tyler Alford.

In the ninth Ryan Queener drew a one-out walk before a single to right by Dalton Tinsley, putting runners on the corners. Tinsley stole second and Brady Hightchew also walked, loading the bases and ended the day for Gomez.

Stevie Smith allowed the game-winning single to left by Cain but retired the next two batters to keep it a one-run game.

The two teams will play a doubleheader on Saturday beginning at 11 a.m. before the Bulldogs head south for four games next week in Daytona Beach, Fla.