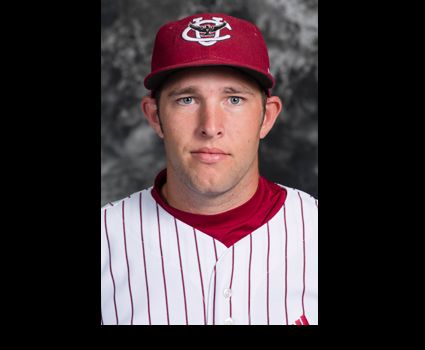 DAYTONA BEACH, Fla. – Junior lefty Marc Monroe allowed just three hits and one earned run in eight innings and struck outs seven leading the Cumberland baseball squad to a 6-2 victory over No. 25 Ave Maria University on Monday afternoon at Sliwa Stadium on the campus of Embry-Riddle.

Monroe’s (2-0) lone blemish came in the top of the first inning, when a fielding error and a strikeout wild pitch put runners on first and third with one out. Ave Maria (13-14) first baseman James Lesniewski followed with a single down the third base line to make it 1-0.

Over the next 4.2 innings, Monroe would not allow another Gyrene batter to reach base, retiring 14 straight hitters. The Bradenton, Fla., native allowed a single to the leadoff batter in the sixth, but induced a double play to again retire the minimum in the frame.

Acting as the visitors in the neutral site contest, Cumberland (15-7) got on the board in the top of third with three runs. Catcher Bryan Haney led off the inning with a single, and redshirt sophomore Chris Hall followed with a bunt single. Zach Cole, acting as the courtesy runner for Haney advanced to third on the play when an errant throw sailed down the first base line.

Immediately following, Justin Byrd tied the game with an RBI single to left field, and Sam Lind reached on an error to load the bases. Redshirt senior Ricky Coleman gave CU its first lead with a two-RBI single that skated between the shortstop and third basemen.

Josciel Veras scored in the fifth to give the Bulldogs a 4-1 advantage thanks to a balk on the Ave Maria pitcher. Veras singled with one out to right field, moved to second on a Tyler Anderson single and moved to third on a passed ball.

Senior Will Henderson made it 5-1 one batter later with a single to left field to bring home Anderson.

The Bulldogs added a final run in the fifth, manufacturing a run after a leadoff double from Hall. The Lebanon, Tenn., native moved to second on a groundout and scampered home on a sacrifice fly from Lind.

Hall reached base five times in the contest, going 3-for-3 with a double, two walks and a pair of runs scored. Veras added a pair of hits in a 2-for-5 afternoon. In total, Cumberland collected 12 hits, as everyone with a plate appearance recorded a hit.

Ave Maria tacked on a run in the bottom of the ninth inning, an unearned run off freshman reliever Andrew Woodfin. Woodfin allowed just the one run on no hits, but did walk a batter.

Cumberland is back in action at Sliwa Stadium for a twinbill with No. 3 Embry-Riddle. The Bulldogs and Eagles are set for a 3:30 p.m. CT first pitch.