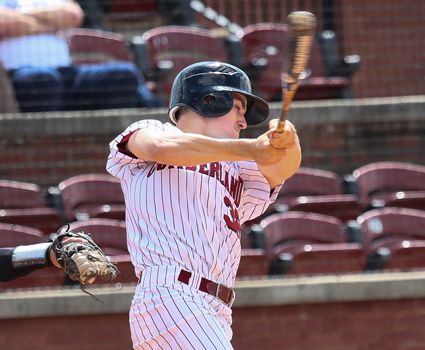 DAYTONA BEACH, Fla. – Cumberland led in both games during a twinbill versus No. 3 Embry-Riddle, but late miscues led to an Eagles’ sweep as the home squad won, 6-3 and 5-4 respectively, in a pair of contests Tuesday at Sliwa Stadium.

Embry-Riddle (16-9) senior Kevin Lindheim put an end to an extra inning game one with a three-RBI walkoff home run in the ninth inning of the scheduled seven frame contest.

Cumberland (15-9) jumped out with a two-run lead in the opening frame when Josciel Veras delivered a two-out, two-RBI single. Chris Hall opened the inning with a single to left and Ricky Coleman and Brady North each reached via free passes to load the bases for Veras.

Darryl Knight cut the lead in half in the bottom of the first with a single off starting pitcher Jake Collier. A pair of singles opened the inning, but a double play put a runner on third with two outs. Knight struck the first pitch he saw into left field.

CU added a run in the third to take a 3-1 advantage over the third-ranked Eagles. Justin Byrd began the inning with a single, and advanced to second on a failed pickoff attempt. Sam Lind pushed Byrd to third with a groundout and, two batters later, he scampered home on a wild pitch.

Junior Tyler Alford drew a seemingly insignificant walk with one out in the fourth inning, but would be the last Cumberland batter to reach base, as Embry-Riddle pitching sat down the next 17 in order.

The Eagles tied the contest in the bottom of the fourth. After a leadoff single from Liam Goodall and a strikeout, center fielder Kyle Buchanan laced a full count pitch over the left field wall, locking the score at 3-3.

The score remained as such as Collier worked two relatively easy frames in the fifth and the sixth. Right-handed reliever Andrew Woodfin held the Eagles scoreless during the seventh and eighth.

Woodfin ran into trouble in the ninth, when back-to-back singles opened the inning. Cumberland brought on closer Stevie Smith to face Lindheim. The right fielder promptly lifted a 1-0 fastball over left field wall to end the game.

In game two, Cumberland pushed across a run in the second when Hall singled through the left side to bring home Richie Season. Seaton reached on a walk, and advanced to second on a single by Bryan Haney.

A miscommunication led to a tie score in the fourth as Embry-Riddle plated a run. The inning began with an inauspicious walk, and was following by a lazy fly ball to right center field. However, the Bulldog center and right fielders each called the other off and backed away as the ball fell to the turf.

Lind rebutted in the top of the fifth inning with a leadoff home run on the first pitch of the stanza. Justin Coleman kept the rally going with a hard single up the middle, and North extended the lead with a no-doubt shot to right field, putting the Bulldogs ahead, 4-1.

The score remained as such until the bottom of the sixth, when Embry-Riddle brought home four unearned runs to take a 5-4 advantage. Rhett Montana led off the inning with a three-base error, and scored one batter later on a single from Johnson.

A walk and a single loaded the bases, but starting pitcher Clint Meadows worked a fly out, the second of the inning. Linheim again delivered, this time with a single to center field which tied the game, and Knight followed with a single to give the lead to the Eagles for the first time all game.

The Bulldogs rallied in the top of the seventh with back-to-back singles, but a base running error proved too much to overcome as the squad fell to close out the two-game sweep.

Cumberland has little time to stew on the defeats, as the club is set for a 9 a.m. matchup on Wednesday versus Clarke University. The team will then return to Lebanon for a day, before leaving for a Mid-South Conference series versus St. Catharine College over the weekend.