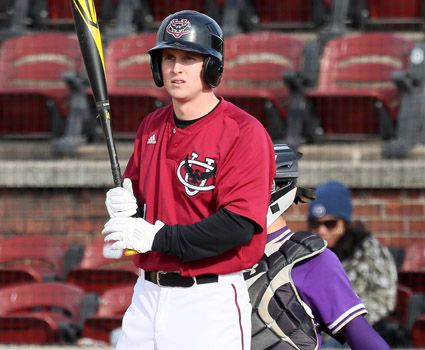 The Bulldogs (20-12, 5-5 Mid-South) pounded out 15 hits and four players finished with multiple hits, including three from Brady North and two apiece by Justin Byrd, Will Henderson and Richie Seaton. Chris Hall also drove in a pair of runs and Lind scored three times.

Kevin T. Greene (2-3) picked up the win with three innings of shutout relief, giving up two hits with one strikeout. Cumberland trailed 5-4 after five innings but plated three runs in the sixth and four each in the seventh and eighth innings, ending the game early because of the mercy rule.

Jacob Russell led the Tigers (15-12, 5-5) with three hits and Alex Kline hit a two-run homer for the visitors. Bret DeRooy (2-3) suffered the loss on the mound, giving up seven runs on nine hits in six innings.

The Bulldogs got on the board first with a run in the second inning, starting with a leadoff single from Byrd, who stole second and went to third on Seaton’s single to center. The duo pulled off the double steal, with Byrd easily scoring when the throw went through to second base, giving Cumberland a 1-0 edge.

Campbellsville came back with the same type of inning in the third, as Gentry Kinsella singled to center with one out and moved to second on Jamie Valle’s sacrifice bunt. Carlos Torres’ grounder got through the leftside, but Tyler Anderson knocked down the ball, saving a run, at least for the moment. The Tigers tried the double steal as well, with Kinsella scoring while Torres was in a rundown, tying the game at one.

The Bulldogs answered in the bottom of the inning thanks to a pair of two-out hits, but the threat started when Lind was hit with one out. North lined out to rightcenter on a nice running catch by Jacob Russell, but he was unable to track down Anderson’s drive into the gap in rightcenter.

The ball got by a diving Russell and Lind scored all the way from first. Byrd followed with an RBI single to rightcenter, giving CU a 3-1 advantage through three complete.

Campbellsville cut into the lead with a run in the fourth after leadoff singles from Kline and Russell. Alex Scanlan’s sacrifice pushed the runners to second and third and Alex Gutierrez’s fly ball deep down the rightfield line plated a run, but CU starter Marc Monroe worked out of the jam when Ricky McCulloch lined out to leftcenter to end the inning.

The Tigers took the lead with three more runs in the fifth, knocking Monroe around for three more hits.

Valle drew a four-pitch walk and with two outs, Kline belted a two-run homer to rightcenter, his first of the season. Russell followed with a double off the wall in leftfield and Scanlan’s single to center scored another for a 5-3 advantage for the visitors.

Cumberland plated a run in the bottom of the frame when North doubled with one out and after a two-out walk to Byrd, Henderson dumped an RBI single into rightcenter, cutting the Campbellsville lead to one.

The Bulldogs retook the lead with three runs in the sixth behind heads-up baserunning and good hitting by a pair of lefthander batters.

Hall drew a one-out walk and Ricky Coleman chopped a single over the third baseman’s head. Hall motored to third on the play, drawing a throw, and Coleman took the extra base as well. Lind took an outside breaking ball and lined it into leftcenter, scoring both runners.

North then singled to the opposite field as well, with the ball hitting the lip on the back of the infield and taking a detour into leftfield. The ball got by Torres and went all the way to the wall, allowing Lind to score from first on the play for a 7-5 edge.

Cumberland added four unearned runs in the seventh to put some distance between it and the Tigers.

Henderson and Seaton both singled to leadoff and Tyler Alford laid down a bunt, but reliever Chris Tuma’s throw to third was high and hard, bouncing off the glove of Scanlan and into leftfield. Henderson scored on the play and the runners ended up at second and third.

Hall’s sacrifice fly scored Seaton and with two outs, Lind hammered a two-run homer to right, his fifth of the year, pushing the Bulldog lead to 11-5.

In the eighth four walks by Ethan Berchet-Hall plated a run and Chris Hall’s RBI single made it 13-5. Coleman’s RBI groundout scored another and Lind’s single got by Torres in left again, plating the final run of the game for the Bulldogs.

Cumberland and Campbellsville conclude the three-game series tomorrow with a doubleheader starting at Noon.