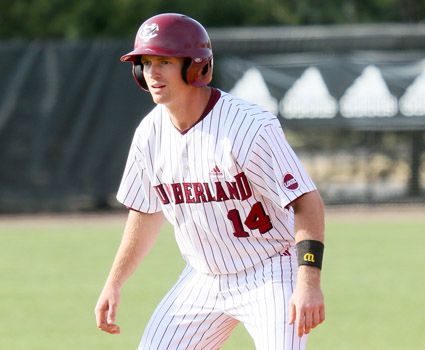 Sam Lind and Anthony Gomez were named the Baseball Player and Pitcher of the Week, respectively, by the Tennessee Sports Writers Association on Wednesday. (Credit Steve Wampler)

NASHVILLE, Tenn. – Cumberland University’s Sam Lind and Anthony Gomez were named the Baseball Player and Pitcher of the Week, respectively, by the Tennessee Sports Writers Association on Wednesday after their performances from March 17-23.

Lind batted .577 (15-for-26) with four extra-base hits and 11 RBIs in six games for the Bulldogs. The Hartford, S.D., native posted three hits with a triple, one RBI and two runs scored versus Embry-Riddle and then went 4-for-5 with a double, solo homer, two RBIs and three runs scored against Oklahoma Wesleyan.

In the weekend series at home versus Campbellsville University, the senior infielder registered eight hits in 14 at-bats, including three hits with a two-run homer and three runs scored in the series opener. He added an RBI single in the second game and was 4-for-4 with four opposite-field singles, three RBIs and a run scored in the finale.

Lind has raised his batting average to a team-best .425 and also leads the club with 10 doubles, five homers (tied for team lead) and 35 RBIs. He is batting .423 with 15 RBIs in 12 conference games so far as well.

Gomez faced just one batter over the minimum and retired the final 19 hitters of the game, tossing a two-hit shutout (one was erased on a doubleplay in the first inning) against Campbellsville. The lefthander struck out six.

The Norwalk, Calif., native allowed two singles in the first inning before setting down the Tigers the rest of the way. Gomez threw just 72 pitches in the seven-inning victory, his first win since February 15 versus Taylor University. He lowered his ERA to 2.43 and now has 50 strikeouts in 40.2 innings of work this season. Gomez also tossed 10 shutout frames against Campbellsville in last year's conference tournament before the Tigers scored twice in the 11th in a 2-0 victory.

Cumberland won a 14-inning contest at Tennessee Wesleyan on Tuesday and plays at Lindsey Wilson this weekend in a Mid-South Conference series.