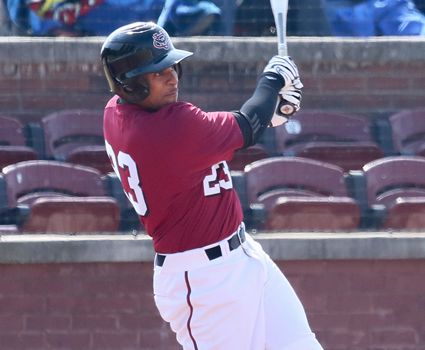 LEBANON, Tenn. – Ricky Coleman’s two-run single in the 10th inning gave Cumberland a victory in the opener but Alex Bautista’s three-run homer in the first put Lindsey Wilson ahead early and Derek Shugart’s two-run triple in the sixth provided insurance in a 7-4 LWC win in the second contest on Sunday at Egnew Field in Columbia, Ky.

Sam Lind was 3-for-4 and hit a two-run homer in the first game for the Bulldogs, but Mitchell Osnowitz’s two-run shot tied the game at three. LWC took advantage of its limited opportunities in the contest, as the Blue Raiders had just six total baserunners in 10 innings.

The Bulldogs broke through in the 10th inning, with Richie Seaton drawing a leadoff walk and Tyler Alford reaching on a fielder’s choice where no out was recorded. Chris Hall moved the runners to second and third with a sacrifice bunt before Coleman’s two-run single up the middle on an 0-2 pitch.

Chris Hall collected three hits and scored twice and Coleman, Lind and Justin Byrd each posted two hits in the second game, including a solo homer from Byrd, but the Bulldogs stranded 10 runners on base and LWC plated three unearned runs in the sixth inning to break open a one-run game in an 8-4 victory for the home team.

Cumberland scored twice in the first inning but missed a chance for more. CU added single runs in the second and third innings but left the bases loaded in the first and fourth innings and stranded at least one runner in sixth of the seven innings.

Luke Shearrow (2-2) picked up the win with six-plus innings of relief, giving up two runs on eight hits with one walk and two strikeouts. LWC starter Scott Sebald got just one out, allowing two runs and three walks before Shearrow entered the contest.

Lindsey Wilson took the first lead in the opener, plating a single run in the third inning when Lepnardo Ramirez reached on an error by rightfielder Byrd and moved to second on the play. Jeandro Andino’s infield single put runners on the corners and Shugart’s groundout plated the run for the Blue Raiders.

CU tied the contest in the fifth after Byrd singled to right with one out and Will Henderson beat out an infield single. The throw from shortstop Michael Rosario was wild, allowing the runners to advance to second and third, and Seaton’s groundout scored Byrd.

In the sixth Hall led off with a single and Coleman moved the runner to second with a sac bunt. Lind then homered to rightcenter, his sixth of the year, giving the Bulldogs a 3-1 edge.

But that lead was short-lived, with LWC answering with two runs of its own in the bottom of the frame.

Andino led off with a single and went to second on Shugart’s sac bunt. Osnowitz then homered to centerfield, his seventh of the season, tying the game at three.

Cumberland had a chance to take the lead in the eighth after Hall singled to leadoff and stole second. Coleman walked, but Lind struck out and Brady North grounded into an inning-ending doubleplay, setting up Coleman’s game-winning single in the 10th inning.

Cumberland struck first in the second game with a pair of runs in the first but missed a chance for more.

Hall drew a leadoff walk and Coleman followed with a single through the left side, putting runners on the corners. Lind’s sacrifice fly made it 1-0 and after a walk to North, Tyler Anderson reached on a fielder’s choice. The throw from Rosario got away, allowing Coleman to score for a 2-0 advantage after a half inning.

Byrd walked to load the bases, ending the day for Sebald, but Henderson flied out and Seaton grounded out to end the inning with only two runs coming across.

The Blue Raiders came right back, with Shugart doubling down the leftfield line with one out and Jordan Berry hit by the pitch with two outs. Bautista then homered to left, his fifth of the year, giving LWC a 3-2 edge after one inning.

In the second inning Hall, Coleman and Lind had back-to-back-to-back singles, tying the game at three, but Lind was picked off after making a wide turn around first base, ending any more threat.

Byrd’s solo homer to rightfield in the third put the Bulldogs ahead, 4-3, but again that lead was short-lived.

Shugart walked and Osnowitz singled to start the bottom of the inning, putting runners on the corners. Bautista’s groundout scored one run and Rosario’s two-out single to right put Lindsey Wilson back in front, 5-4.

Cumberland loaded the bases in the fourth after Hall singled and Coleman reached on an error with one out. North walked with two outs, but Anderson flied out to rightcenter to end the threat.

In the sixth Hall and Lind both singled, but North bounced into a 4-6-3 doubleplay to end the inning with CU still trailing by a run.

The Blue Raiders added three insurance runs in the bottom of the inning thanks to a pair of CU miscues.

Trey Davis reached on an error by first baseman North to start the frame and after a pair of groundouts, Andino reached on a fielding error by Coleman at third base. Shugart followed with a two-run triple to leftcenter and he scored on Osnowitz’s single to left for an 8-4 LWC advantage.