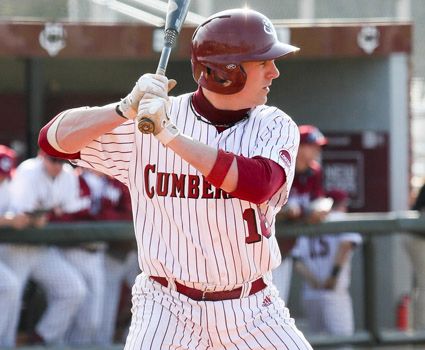 LEBANON, Tenn. - Brady North's grand slam ended the game in the eighth inning and Sam Lind kept up his hot hitting, collecting three more hits with five RBIs, as Cumberland scored nine times in the first three innings and then plated eight runs in the eighth in a 17-5 victory over Bethel University on Tuesday at Ernest L. Stockton Field-Woody Hunt Stadium.

The Bulldogs (24-14) jumped out early with five runs in the first, including a two-run homer from Lind and a two-run single by Bryan Haney, and added two runs in both the second and third innings. But then the home team went scoreless for four frames, stranding just three total runners in the four innings.

Bethel (17-13) missed several chances to take advantage of some wildness of CU pitching in the sixth and seventh innings before finally breaking through with three runs in the eighth with a sacrifice fly from David Glover and an RBI single by Ryan Huber. Gadier Charriez was hit with the bases loaded as well, forcing in the third run and cutting the Bulldog lead to 9-5.

Cumberland responded with eight runs in the bottom of the inning with four doubles in the frame. Tyler Anderson and Justin Byrd had back-to-back two-baggers to start the inning and Will Henderson followed with another double. Haney’s double to deep centerfield plated two more runs and Chris Hall’s grounder through the right side scored another.

Ricky Coleman singled and Lind drew his second walk of the game before North ended the contest with a high fly ball that just cleared the wall in rightfield for his sixth homer of the season.

North finished 4-for-6 with five RBIs and two runs scored, leading the 19-hit attack for the Bulldogs, while Coleman added three hits and scored four times. Haney posted three hits and four RBIs and Hall and Lind both scored three times as well.

Clint Meadows (4-3) picked up the win with five innings of work, allowing two runs on three hits. The righthander walked two, hit two batters and struck out one and worked around eight baserunners in his five frames.

Bethel stranded 11 baserunners, including the bases loaded in the seventh and eighth innings and two more in the third and sixth. BU starter Turner Bush (3-2) suffered the loss, giving up nine runs on 10 hits in 2.1 innings. He walked five and threw five wild pitches.

Charriez hit a towering fly ball that blew back fair, just over the leftfield foul pole, giving Bethel a 1-0 lead in the top of the first, but the Bulldogs responded with five runs in the bottom of the inning.

Hall led off with a walk and went to second on a wild pitch. Coleman then singled sharply to right and the ball skipped by Bethel’s Lance Jerreld, allowing Hall to score on the play. Lind belted the first pitch he saw over the wall in rightcenter, his seventh homer of the season, putting the Bulldogs ahead, 3-1.

North followed with a single and Byrd walked with one out. Both runners moved up on a wild pitch before a two-out walk to Richie Seaton loaded the bases. Haney blooped a single into rightcenter, plating two runs, for a 5-1 advantage after one inning.

In the second Coleman led off with a double down the leftfield line and Lind followed with an RBI single to leftcenter. Lind went to second on the play when Alonzo Powell booted the ball and North also singled to center, scoring Lind for a 7-1 lead.

Hall dumped a single into short leftfield with one out in the third, stole second and moved to third on a wild pitch before Coleman walked. He went to second on another wild pitch and Lind’s single down the rightfield line scored two runs for a 9-1 advantage.

The Wildcats plated a run in the fourth when Colton Kail led off with a single and Jerreld was hit. A ground ball from Martin Key put runners on the corners before a sac fly by Owens pushed across the run.

Charriez, Kaila and Jerreld all singled to start the sixth inning for Bethel, but Charriez was thrown out at the plate on a ball that got past the catcher. Key walked to load the bases again, but CU reliever Leo Sierra got out of the jam with a line drive doubleplay to Lind.

Back-to-back doubles from Glover and Wes Warren put runners at second and third with one out in the seventh for BU and Huber walked to load the bases, but Charriez fouled out and Kail grounded out to end the inning.

Bethel broke through in the eighth after Jerreld reached on an error by Coleman at third base to start the frame. Owens and Tyler Lyons both walked to load the bases before Glover lined out to center for a sac fly. Warren walked to again load the bases and Huber’s single to center plated one run. Charriez was hit by the pitch, forcing in another run and bring the tying run to the plate, but Kail lined out sharply to Lind at second base to end the inning.

Cumberland hosts the University of the Cumberlands this weekend in a three-game series beginning Friday at 2 p.m. Saturday’s doubleheader starts at Noon, as the Bulldogs play 12 of their final 16 regular season games at home.