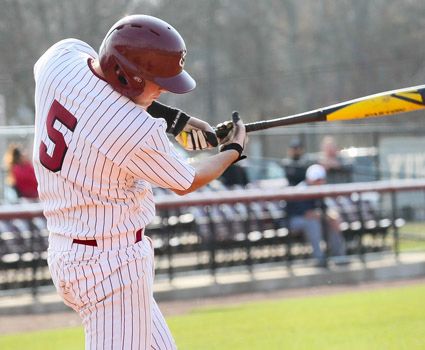 Tyler Anderson collected four hits and drove in a career-high six runs in CU's 11-7 victory Friday over the University of the Cumberlands. (Credit Steve Wampler)
Univ. of Cumberlands at Cumberland Univ. | April 04, 2014

LEBANON, Tenn. – Tyler Anderson drove in a career-high six runs and Ricky Coleman collected a career-best five hits, as Cumberland scored eight runs in the first four innings in an 11-7 victory over the University of the Cumberlands on Friday at Ernest L. Stockton Field-Woody Hunt Stadium.

The Bulldogs (25-14, 8-7 Mid-South) won the first game of a conference series for the third straight week, pounding out 16 hits in the win. Coleman scored four runs in addition to his five hits while Anderson was 3-for-4 with six RBIs, including two-run singles in the first and seventh innings.

Cumberland plated two runs in the first and three apiece in the third and fourth innings. CU took a 9-1 advantage before Jake Goodman’s grand slam for the Patriots (21-14, 5-10) in the seventh cut the lead in half. Anderson’s two-run single extended the advantage for the Bulldogs.

CU starter Anthony Gomez (3-2) scattered seven hits, walked four and struck out four in six innings of work to pick up the win. The lefthander struggled with control at times but worked out of jams in the third, fourth and fifth innings, stranding 10 Patriots runners during his six innings on the mound.

The Bulldogs loaded the bases in the bottom of the first on a walk to Hall, a single to right by Coleman and another free pass, this one to Lind, but North bounced into a 3-2-3 doubleplay. Anderson picked up the club, though, with a full count, two-run single to leftfield for a 2-0 lead after one full inning.

The Patriots loaded the bases in the top of the third inning on a soft single to rightcenter from Matt Madrigal and a one-out walk to Trent Abner, Gomez’s first free pass in four weeks. With two outs Claudio Valencia’s single just to the right of the mound loaded the bases, but Keith Tidwell lined out to rightcenter to end the threat.

Coleman laced the first pitch in the bottom of the inning over the wall in leftcenter, right into the teeth of the 20-plus mile-per-hour wind, for his first round-tripper of the year.

Lind followed with a double to rightcenter and Anderson’s one-out double down the leftfield line made it a 4-0 Bulldog advantage. Justin Byrd singled to rightcenter, scoring Anderson, and after a flyout by Will Henderson, Schubert’s day ended.

UC took advantage of some more wildness from Gomez to score a run in the fourth inning, with Jared Martin drawing a leadoff walk before the lefthander recorded two outs, one on a fielder’s choice. He then walked Madrigal and Luis Hernandez reached on a single off the hands that traveled about 75 feet, just to the right of the mound again.

Trent Abner also drew a free pass, forcing in a run, but Lucas Bagnara flied out to rightcenter, ending the inning without any more damage.

Bryan Haney was hit to leadoff the bottom of the inning for CU and reliever Tyler Kilgore air-mailed a pickoff throw, allowing pinch-runner Zach Cole to move to second. He went to third on a groundout by Hall and scored on a wild pitch.

Coleman collected his third hit with a sharp single to left, Lind was hit and North walked, loading the bases for the Bulldogs, before a sacrifice fly to left from Anderson, his fourth RBI of the day. Byrd then ripped a 1-2 pitch into centerfield, scoring Lind for an 8-1 CU advantage.

Seaton led off the fifth inning with a double to leftcenter and Hall’s single up the middle, right between the legs of Brewers, plated the run for a 9-1 lead. The Bulldogs loaded the bases later in the frame with a double by Coleman and a walk to North, but Anderson grounded out to end the inning.

The Patriots cut the deficit in half in the seventh with one swing of the bat after walks to Keith Tidwell and Zach McRoberts and Martin was hit. Goodman belted a 2-2 pitch from CU reliever Andrew Woodfin over the wall down the rightfield line, his first homer of the season, making it a 9-5 Cumberland lead.

The Bulldogs came back with two runs in the bottom of the inning, starting with a leadoff single from Hall. Coleman reached when second baseman Ryan Johnson’s throw to second pulled Valencia off the bag, and Lind followed with his second hit of the day, a single to right, loading the bases.

Bagnara reached to start the eighth when Lind dropped a pop-up in the infield but was forced out on a ground ball by Valencia. He stole second and scored on Martin’s two-out single down the rightfield line.

In the ninth Jake Goodman walked to leadoff and Stone Osborne followed with a single to center. With one out Abner singled through the hole on the right side, scoring the final run of the game.

The two teams conclude the series Saturday with a Noon doubleheader. The Bulldogs play at Freed-Hardeman on Monday before returning home Tuesday to face fifth-ranked Georgia Gwinnett.