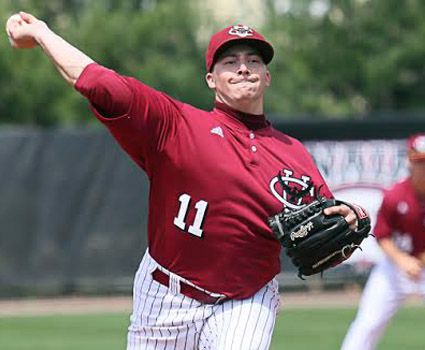 LEBANON, Tenn. – Cumberland’s Jake Collier tossed a three-hit shutout in the opener and Sam Lind’s three-run homer provided all of the offense, but an error in the seventh inning opened the door in the second game for the University of the Cumberlands, as the team’s split a doubleheader Saturday at Ernest L. Stockton Field-Woody Hunt Stadium.

The Bulldogs (26-15, 9-8 Mid-South) were unable to complete the series sweep, as the Patriots scored twice in both the sixth and seventh innings to take a 4-2 victory in the second game. Cumberland won the opener, 3-0, behind Collier’s complete game and Lind’s three-run shot down the rightfield line in the sixth inning.

Collier (3-3) retired 13 of 14 batters after a first-inning single, with the only runner reaching base on an error. The righthander did not walk a batter, hit one and struck out three, allowing just five baserunners in the nine-inning victory in his first conference start of the year. Lucas Bagnara, who singled in the first inning, was the only UC player to reach second base.

The Bulldogs managed just three hits against UC starter T.J. Campbell (3-1) until back-to-back singles from Chris Hall and Ricky Coleman to leadoff the sixth inning. Lind’s three-run homer was his eighth of the season. Campbell allowed three runs on six hits in six innings with no walks and three strikeouts.

In the second game Cumberland starter Stevie Smith allowed just two baserunners through five innings before Hibraim Cordova homered down the leftfield line to start the sixth for the Patriots (21-16, 6-11). Claudioss Valencia singled and Keith Tidwell doubled later in the inning and Valencia came across on a sacrifice fly from Jared Martin.

The Bulldogs tied the game in the bottom of the inning thanks to an error by UC hurler Cameron Smith.

Brady North and Tyler Anderson both singled with two outs and Smith tried to pick off pinch-runner Zach Cole at second base, but the throw sailed into centerfield, allowing both runners to move up. Justin Byrd followed with a two-run single to center, knotting the score at two.
But the Cumberlands responded with two more runs in the seventh, also with the help of an error.

Zach McRoberts led off the inning with a single, ending the day for Stevie Smith (5-1), who gave up three runs on six hits with four strikeouts in six-plus innings.

Matt Madrigal’s sacrifice attempt was booted by reliever Kevin T. Greene and Ryan Johnson’s bunt single loaded the bases for UC. Trent Abner’s groundout plated a run and after Cordova was intentionally walked, loading the bases again, Bagnara drew another free pass, forcing in a run for a 4-2 Patriots lead.

Anthony Webster (2-0) picked up the win in relief, getting all four batters he faced with one strikeout.

After collecting 19 hits in Friday’s win, Cumberland managed just 14 in 16 innings on Saturday against the Patriots, including two in each contest from Byrd.

The Bulldogs play at 20th-ranked Freed-Hardeman on Monday at 5 p.m. and face fifth-ranked Georgia Gwinnett at home on Tuesday at 2 p.m.