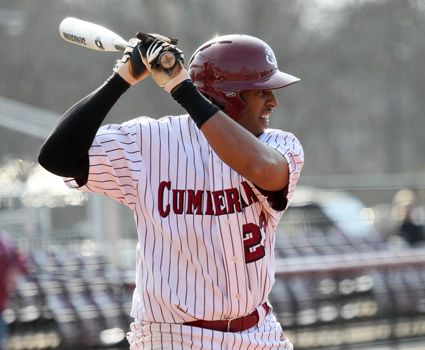 LEBANON, Tenn. – Ricky Coleman collected three hits with a pair of doubles and his second home run of the season, but fifth-ranked Georgia Gwinnett took advantage of seven walks, plating a pair of runs in the third and sixth innings in a 5-3 victory over Cumberland on Tuesday at Ernest L. Stockton Field-Woody Hunt Stadium.

The Bulldogs (26-16) dropped their second straight contest in their next-to-last non-conference game of the season. Coleman posted three of the club’s seven hits in the game, as three Grizzlies (37-6) hurlers stranded six runners and struck out three.

Sheldon Connor (7-0) picked up the victory for GGC with five-plus innings of work, allowing two runs on four hits. He walked three and threw one wild pitch, giving way to Tyler Carpenter, who allowed one run on three hits in two innings but struck out Coleman to end the seventh after the Bulldogs pulled within 5-3.

Alex Roberts posted his first save of the year with two hitless innings to end the game, walking one and striking out two.

Coleman gave the Bulldogs an early lead with a solo homer to rightcenter with one out in the first inning, his second round-tripper of the season, but the Grizzlies plated two runs in the third to take the lead for good and could have easily had more.

Phillip Bates was hit to start the third inning and went to second on a passed ball. A single to leftfield from Jake Fields plated the run, tying the game, and Fields took second on the throw. Robbie Payne reached on an infield chopper over the mound before a four-pitch walk to Ty Abbott, loading the bases for GGC.

Pat Long also drew another free pass, forcing in a run and ending the day for CU starter Clint Meadows (4-4), who took the loss, allowing two runs on three hits in two-plus innings. He walked five and did not strikeout a batter.

Kevin P. Greene got out of the jam without any further damage thanks to a line drive doubleplay and a fly out by Zach Alvord. Greene tossed five innings of relief, giving up three runs on five hits.

Georgia Gwinnett added a run in the fourth when John Fidanza led off with a single to right and pinch-runner Garitt Church reached second on an error by CU’s Sam Lind on a ground ball. A walk to Fields loaded the bases before the first of two sacrifice flies in the game from Payne made it a 3-1 GGC advantage.

The visitors got two more runs in the sixth, with Fidanza starting the rally again after being hit with one out. Bates singled to center and Fields walked, once again loading the bases, before Payne’s sac fly. Abbott’s two-out single to left pushed the Grizzlies lead to 5-1.

Cumberland got a run back in the bottom of the inning after Coleman’s leadoff double and a walk to Lind. Brady North’s single to right plated a run, chasing Connor from the contest, but Tyler Anderson lined out and GGC turned an unusual 6-5-4 doubleplay to end the inning still leading, 5-2.

In the seventh Tyler Alford singled with two outs and Chris Hall followed with an RBI double to right, scoring pinch-runner Zach Cole, but Coleman struck out to end the inning with the Bulldogs still trailing, 5-3.

CU’s only runner against Roberts came on a two-out walk to Richie Seaton in the ninth, but Alford struck out to end the game.

Cumberland hosts the University of Pikeville this weekend in a three-game series starting Friday at 2 p.m. Saturday’s doubleheader begins at Noon and the 2004 national championship team will be honored between games of the twinbill.