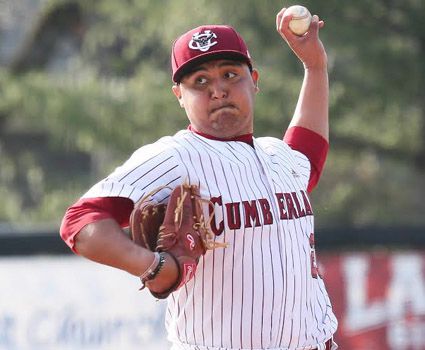 Hall’s RBI single in the fifth tied the game at one and his sacrifice fly knotted the score at two as well before Zach Cole scored on Ricky Coleman’s single to left. In the eighth Jarrett Plunkett scored on a wild pitch and Justin Byrd came across on an infield single from Alford, who also doubled earlier in the contest to set-up the first run.

Anthony Gomez (4-2) battled through a complete game, allowing two runs while scattering eight hits. The lefthander walked one, struck out five and stranded six Pikeville runners, including two in the eighth with CU holding a 3-2 advantage.

The errors overshadowed a strong effort from UPike’s Zak Sutherland (4-4), who gave up two earned runs on eight hits in eight innings. The lefthander walked three and struck out two.

Cumberland and Pikeville conclude the three-game series on Saturday with a Noon doubleheader. The Bulldogs will honor the 2004 national championship team between games of the twinbill as part of the weekend celebration for the team.

Both teams had baserunners in the first inning but stranded them at second base after singles from Nothwehr and Coleman. The same thing happened in the second inning with singles by Contreras and Byrd.

The Bears took the first lead of the game in the third when Brad Andrews lined a double off the base of the wall in rightcenter and Nothwehr dumped a single down the rightfield line for a 1-0 UPike advantage.

Cumberland tied the contest in the fifth after a ground ball past the third base bag for a double from Alford. Hall followed with a chopper through the right side, plating pinch-runner Cole.

Cody Chagnon ripped a double to the deepest part of the ballpark with two outs in the seventh for Pikeville. Connor Osborne followed with a bloop single to leftcenter, scoring pinch-runner Scottie Whitaker, for a 2-1 Bears edge.

But the visitors made two critical errors in the bottom of the inning that helped Cumberland take its first lead of the contest.

Josciel Veras drew a leadoff walk and after a popout, Alford grounded into the hole on the right side. James Brooks got to the ball, but his throw to second was high and wide, sailing into leftfield. Both runners moved up on the play and Veras scored on a medium-depth fly ball to leftfield from Hall, tying the game at two.

Coleman then singled sharply to left and Cole went to third but was being held-up until Nothwehr fumbled the ball, allowing the runner to score for a 3-2 edge after seven complete.

In the eighth Brady North singled and pinch-runner Plunkett went to second on a sac bunt from Tyler Anderson. After a walk to Byrd, Veras flied out deep leftfield and both runners moved up on the play, which proved to be a big move.

Sutherland threw a wild pitch and Plunkett was able to score, though the pitcher dropped the flip from the catcher after the ball bounced about halfway back to the plate off the backstop. Alford’s nubber off the end of the bat ended up in no man’s land between first and second, allowing Byrd to score the final run of the game.