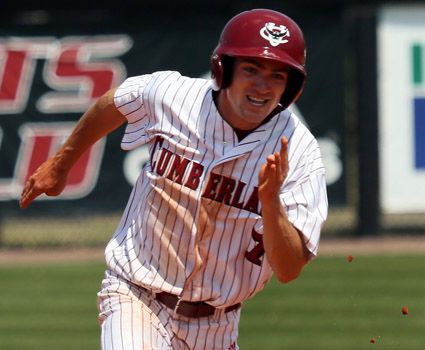 LEBANON, Tenn. – Chris Hall collected two hits and one RBI and scored twice, Ricky Coleman scored twice as well and Cumberland worked out of a bases-loaded jam in the ninth, holding on for a 7-6 victory over Tennessee Wesleyan here Tuesday at Ernest L. Stockton Field-Woody Hunt Stadium.

The Bulldogs (30-16) led 7-2 heading to the sixth inning, but three straight singles set the table for Cody Heifnar, who hammered a 3-1 pitch to leftfield for a grand slam, cutting the CU lead to 7-6.Tennessee Wesleyan (24-19) loaded the bases in the ninth as well with two singles and an intentional walk, but Austin Williams worked out of his own mess, striking out James Boddicker before Matt Malloy popped out to end the contest.

Cumberland won its fourth straight game overall and seventh in the last nine outings despite stranding nine baserunners, including six in scoring position. Justin Byrd and Josciel Veras each collected two hits for the Bulldogs and seven different players drove in one run.

Tyler Alford (1-0), the team’s usual starter at catcher, made his first-ever appearance on the mound and retired five straight batters to earn the win, coming in after TWC pulled within a run. Jackson White worked a perfect eighth inning and Williams posted the squad’s first save of the season, giving up two hits and one walk in one inning.

Wesleyan scored twice in the first inning to take an early lead after leadoff singles from Branden Walker and Logan Dalton. Malloy doubled into the gap in rightcenter with one out, plating both runners for a 2-0 TWC advantage.

The Bulldogs answered quickly with two runs of their own in the bottom of the inning, with Hall beating out an infield single and Coleman reaching on a walk. Both runners moved up on a wild pitch and Sam Lind’s single through the rightside scored one run. Brady North then flied out to leftfield, plating another and tying the contest at two.

Cumberland took the lead in the third when Hall tripled to leftcenter and scored on a ground ball up the middle by Coleman that was bobbled by shortstop Wes Minton. North drew a one-out walk before Tyler Anderson ripped a double over the head of Walker in centerfield, plating Coleman for a 4-2 CU lead.

CU added to the advantage with three runs in the fifth, with the rally starting with a two-out walk to Anderson. Byrd reached on an excuse-me swing single through the right side and Veras followed with an RBI single to center.

Richie Seaton then singled sharply off the glove of first baseman KJ Hockaday, scoring Byrd, and consecutive walks to Bryan Haney and Hall forced in another run for a 7-2 edge for the home team.

Wesleyan got back into the game with just one swing in the sixth after singles to leftfield by Minton and Hockaday and a bloop single to center from Tim Kiene, loading the bases. Heifnar then drilled a 3-1 pitch from Woodfin well over the wall in leftfield for a grand slam, his second homer of the season, cutting the CU advantage to 7-6.

Neither team threatened again until the ninth when Heifnar led off with a single to center and Brad Carpenter executed the fake-bunt, slash-hit to perfection, chopper a ball over the hard-charging Coleman and off the chalk down the leftfield line. After fouling off the first two pitches, Walker laid down the sacrifice bunt to move the runners and Dalton was intentionally walked, setting up the force.

But Williams struck out James Boddicker on three pitches and after Malloy fouled off four pitches, he popped out to second base to end the game.

Cumberland heads to Bluefield College for a three-game series this weekend starting at 5 p.m. Central Time on Friday.