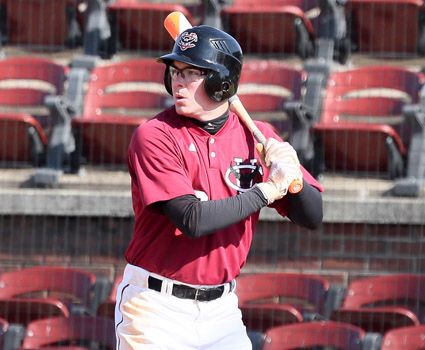 LEBANON, Tenn. – Tyler Timmer’s second homer of the game tied the game and Sawyer McLamb’s two-out single to center plated the winning run, as Bluefield erased a four-run deficit and posted a 6-5 victory over Cumberland in 12 innings on Friday night at Bowen Field in Bluefield, Va.

Sam Lind’s three-run homer in the first inning and a groundout from Chris Hall in the second gave the Bulldogs (30-17, 12-9 Mid-South) a 4-0 lead, but the Rams (30-12, 11-10) battled back with single runs in the third and fifth before Timmer’s two-run homer in the seventh tied the contest.

Neither team could muster any runs in the eighth and ninth innings nor in the first two extra frames until CU took the lead again in the 12th inning.

Justin Byrd singled to centerfield with one out and stole second. Richie Seaton’s screamer off the glove of McLamb bounced into centerfield, allowing Byrd to score the go-ahead run for a 5-4 advantage.

Timmer’s second homer of the game with one out in the bottom of the inning tied the contest at five. Wright singled through the rightside with two outs just moments after missing a double and Copeland followed with a walk, setting up McLamb’s game-winning single up the middle. Byrd’s throw to the plate was off-line, allowing Wright to slide in with the winning run and the Rams to take the first game of the series.

McLamb, Kahlin Villines and Jacob Schober each collected three hits for the Rams, who pounded out 17 hits in the contest. Villines scored twice and drove in a run and was thoroughly in the middle of all of the Bluefield offense during the initial comeback.

The bottom four in the Cumberland lineup – Byrd, Josciel Veras, Seaton and Tyler Alford – each registered two hits, but the Bulldogs stranded 13 baserunners in the game, including at least one in every inning but the first and third.

The Bulldogs struck for three runs in the first inning thanks to an error to leadoff the game by McLamb at second base, allowing Chris Hall to reach. Ricky Coleman followed with an infield single before Lind belted a three-run homer to rightcenter, his ninth of the season.

CU added another run in the second with one-out singles from Seaton and Alford, putting runners on the corners. Hall’s ground ball to second plated pinch-runner Zach Cole for a 4-0 edge, but the Rams would chip away before tying the game in the seventh.

In the third Villines doubled to leftcenter with one out and scored on Tyler Lundgren’s two-out single to right, making it a 4-1 game.

Bluefield plated another run in the fifth when Tyler Rome led off with a double down the leftfield line and advanced to third on a throwing error by Hall. Villines followed with a line drive to left for a sacrifice fly, cutting the Bulldog lead to 4-2.

Villines was in the middle of the action again in the seventh, leading off with a double down the leftfield line. He stole third and with two outs, Timmer homered to leftfield, his second of the season, tying the game at four.

Cumberland missed numerous chances in the late innings to re-take the lead, with Brady North walking to start the eighth and Alford singling to left to begin the ninth. Both runners moved to second with a sacrifice bunt, but were stranded there on both occasions.

In the 10th inning Tyler Anderson led off with a double down the leftfield line and a single off the pitcher’s glove by Veras put runners on the corners with one out, but Seaton struck out and Alford popped out to end the threat, setting up the theatrics in the 12th inning.

Cumberland and Bluefield conclude the series tomorrow with a Noon doubleheader.