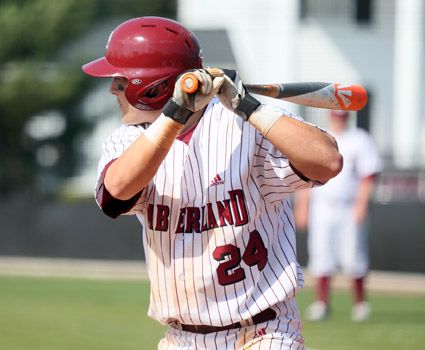 LEBANON, Tenn. – Justin Byrd was 4-for-4 with two RBIs and two runs scored and Ricky Coleman, Richie Seaton and Chris Hall each collected three hits, as Cumberland pounded out 20 hits in an 11-3 victory over the University of Rio Grande on Friday at Ernest L. Stockton Field-Woody Hunt Stadium.

The Bulldogs (33-17, 15-9 Mid-South) concludes the conference series with a doubleheader Saturday beginning at Noon versus the Red Storm (21-27, 6-19). Senior Day activities will take place between games of the twinbill.

Cumberland scored eight runs in the first four innings and never looked back, giving plenty of run support to Anthony Gomez (5-2), who tossed seven innings for the win, allowing one earned run on four hits with nine strikeouts. He lowered his ERA to 2.21 for the season and continues to lead the conference with 84 strikeouts.

Josciel Veras added two hits and three RBIs, Coleman scored three times and Seaton and Coleman each drove in two runs for the Bulldogs, who scored 11 times but also stranded 14 runners in the contest.

Coleman belted a solo home run down the rightfield line in the first, his third of the season, and Byrd hit a solo shot to right in the second, his fourth of the year, giving the Bulldogs a 2-0 edge.

In the third Hall led off with a single, Coleman was hit and Sam Lind walked, loading the bases, before an RBI single to right from Brady North and then a two-run single to left by Veras. After Byrd’s single, Seaton’s sacrifice fly extended the lead to 6-0.

Cumberland added two more runs in the fourth when Hall reached on an infield single, Coleman was hit again and North walked with one out, loading the bases. A sac fly from Veras and Byrd’s RBI single to center made it an 8-0 CU advantage.

The Red Storm scored a pair of runs in the fifth, starting with a leadoff double down the rightfield line by Daryin Lewis. Anthony Knittel singled to left with one out, putting runners on the corners, and Lewis came across when Gomez’s pickoff throw to first got away. Grant Tamane’s two-out single to left plated Knittel, cutting the Bulldog lead to 9-2.

Byrd singled and stole second with one out in the sixth and went to third when Tyler Anderson reached on an error. Seaton’s single to right scored Byrd and Tyler Alford followed with a single, loading the bases. Will Henderson’s ground ball plated a run and Coleman followed with an RBI single, pushing the advantage to 11-2.

In the eighth Kevin Arroyo led off with a single and moved to second on a groundout. Marcus Makuch’s fly ball advanced to the runner to third and he scored when the throw to the infield got away.