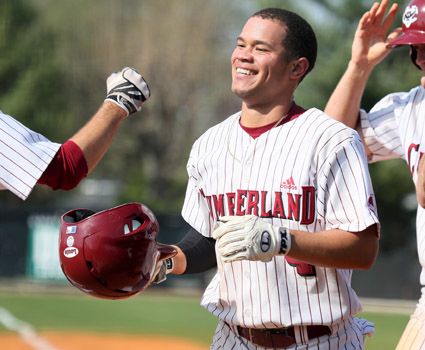 LEBANON, Tenn. – Josciel Veras drove in the winning runs in the final inning in both games of the doubleheader and Brady North belted two home runs in the second game, as Cumberland ended the conference schedule with 7-6 and 8-7 victories over the University of Rio Grande on Saturday at Ernest L. Stockton Field-Woody Hunt Stadium.

The Bulldogs (35-17, 17-9 Mid-South) earned the No. 2 seed in the conference tournament with the victories. The Mid-South Conference Championships begin May 4 in Columbia, Ky.

Carlos Flores belted a three-run homer for Rio Grande (21-29, 6-21) in the top of the ninth after a pair of CU errors, tying the game at six. Ricky Coleman walked for the Bulldogs to lead off the bottom of the inning, Sam Lind followed with a single and North was walked, loading the bases. Veras’ drive into rightcenter plated the winning run for a 7-6 victory in the opener.

Jake Collier (6-3) went the distance in the game for Cumberland, allowing just three earned runs on nine hits. The righthander did not walk a batter, struck out three and induced 17 ground balls.

Coleman, Lind and Veras each had two hits for the Bulldogs, while Lind drove in two runs and Chris Hall and Coleman both scored twice.

North had a three-run homer in the first inning and a solo shot in the fifth, the second one giving the Bulldogs a 7-6 edge, but Veras misplayed a double off the bat of URG’s Marcus Makuch, which scored Daulton Kenyon, who led off the inning with a pinch-hit single.

But Veras made up for the mistake in the bottom of the frame once again, this time after North walked with one out and pinch-runner Jarrett Plunkett took second on a wild pitch. A single to center pushed across the winning run, sending the club’s 15 seniors home with a pair of wins on Senior Day.

Rio Grande reliever Anthony Knittel (3-4) took the loss, giving up one run on two hits with three strikeouts in two-plus innings of work.
North was 2-for-3 with four RBIs and two runs scored and Veras added two more hits in the victory for CU.

Cumberland plated a run in the first inning in the opener of the twinbill, with Hall drawing a leadoff walk and moving to third on Coleman’s infield single to the right side. Lind’s ground ball pushed home the run for an early lead.

A solo homer down the rightfield line for Rio Grande’s Kirk Yates tied the contest in the top of the second, but CU answered with two runs in the bottom of the inning.

Richie Seaton singled with one out and stole second with two outs before an RBI single to left by Hall, who went to second on the throw to the plate. Coleman then doubled down the leftfield line, plating a run for a 3-1 Bulldogs advantage.

In the seventh Coleman walked with two outs, stole second and scored on Lind’s single to center for a 4-1 lead, but back came the Red Storm.

Knittel was hit to start the URG eighth and Flores singled to center. Grant Tamane’s fielder’s choice put runners on the corners with two outs, but Makuch’s double to rightcenter scored both runs, cutting the deficit to 4-3.

Cumberland answered in the bottom of the inning, with Veras leading off with a single and Justin Byrd drawing a walk. A sacrifice bunt by Tyler Anderson moved the runners to second and third and Bryan Haney’s two-out single down the rightfield line pushed the CU lead back to three.

But all of that was for naught when Coleman and Lind both made errors in the ninth on ground balls by Daryin Lewis and Kenyon, setting up the three-run homer to left by Flores, tying the game at six.

In the second contest the Bulldogs started fast again, this time with Byrd and Coleman both drawing walks before an RBI double down the rightfield line from Lind. North followed with a three-run homer to rightcenter for a 4-0 edge after one inning.

The Red Storm tied the game in the fourth thanks to five hits in the frame, starting with a single to left and a double to rightcenter from Makuch. A ground ball by Yates scored one run and Chris Ford popped out for the second out of the inning, but URG strung together three straight hits to knot the score.

Lewis’ infield single plated Yates and Luis Jimenez followed with an RBI double to rightcenter. Flores then singled to center, as well, scoring Jimenez with the tying run.

Cumberland answered in the bottom of the inning, as Will Henderson singled and Haney walked with one out before Coleman’s two-out double to leftcenter gave the Bulldogs a 6-4 advantage.

That lead was short-lived, as URG tied the contest again in the fifth.

Arroyo reached on an error with one out and Tamane walked. Makuch popped out for the second out of the inning, but Yates’ triple to rightcenter plated both runners for a 6-6 game.

North put Cumberland back ahead in the bottom of the inning with his second homer of the contest, this one a solo shot to rightfield, setting up the final-inning fireworks for the second straight game.

The Bulldogs host Bryan College on Wednesday at 3 p.m. in the final regular season contest of the year.