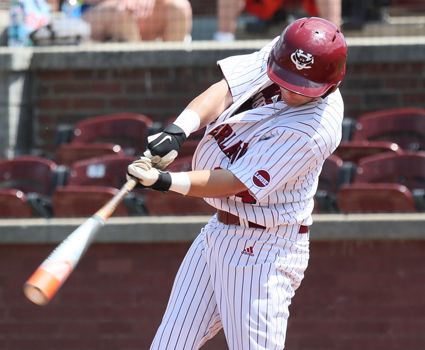 LEBANON, Tenn. – Justin Byrd was voted the Mid-South Conference Player of the Week on Monday after posting 10 RBIs and a pair of homers in two games for the Bulldogs.

The Rockwall, Texas, native was 4-for-9 in the two contests, wins over Bryan College and Lindsey Wilson. The junior hit a pair of grand slams versus Bryan, the first one a line drive that capped a six-run third inning that tied the contest. He belted his second grand slam in the next inning, putting Cumberland ahead for good.

Byrd finished with three hits and eight RBIs and is just the second CU player in the last decade to hit two grand slams in a game, joining Phillip Cuadrado, who did it from both sides of the plate in the same inning in 2004.

He drove in two runs in the first inning of Sunday's contest versus Lindsey Wilson as well. Byrd is batting .349 with 10 doubles, four triples, six homers and 31 RBIs this season after Monday’s victory over St. Catharine College.