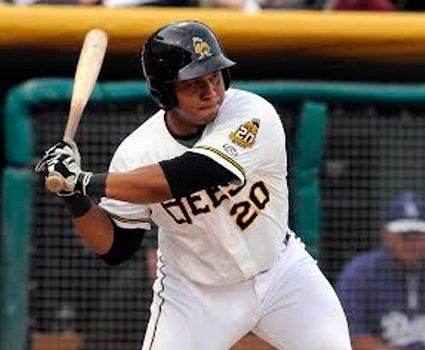 Martinez was the first and is the only former Bulldog player to reach the Major Leagues, appearing in 22 games in 2011 with the San Diego Padres and 10 contests the next season with the Texas Rangers. He was selected in the 12th round by the Padres in 2007 and just started his eighth season in professional baseball.

Martinez is currently in the Los Angeles Angels organization in AAA with the Salt Lake [UT] Bees in the Pacific Coast League. He is batting .259 currently with six doubles, one home run, eight RBIs and eight runs scored in 16 contests. He has played in 540 career minor league contests, collecting 489 hits with a .270 batting average and 112 doubles, 16 home runs and 185 RBIs.

Locante was selected in the 11th round by the Arizona Diamondbacks in 2011 and is still with the organization in Class A with the South Bend [IN] Silver Hawks in the Midwest League. The lefthander has 13 strikeouts in 11.2 innings over eight appearances, all in relief, posting a 1-0 mark. He has allowed just four hits and three earned runs for the Silver Hawks this season after working in 18 contests in the second half of last season in South Bend.

Smith was drafted in the 38th round by the Miami Marlins in 2012 and began this year in the organization in Class A with the Jupiter [FL] Hammerheads in the Florida State League. The lefthander is 1-2 with a 2.01 ERA in 22.1 innings over 10 appearances, all in relief, allowing six runs and six walks with 26 strikeouts this season.