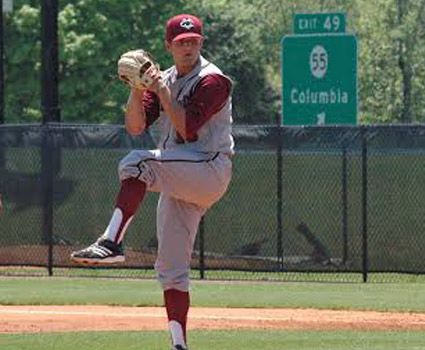 Junior Clint Meadows allowed two runs on four hits in 10 innings to get the win in a 3-2 victory over Georgetown on Tuesday. (Credit Lindsey Wilson Sports Information)
Cumberland Univ. at #3 Georgetown College | May 06, 2014

COLUMBIA, Ky. – Clint Meadows was sensational on the mound after a rocky first inning and Chris Hall plated the winning run with a single in the 10th inning, as Cumberland came from behind for the third straight game, defeating No. 3 Georgetown College, 3-2, here Tuesday at Egnew Park.

The Bulldogs (39-17) advance to the tournament championship game on Wednesday at 1 p.m. and will face either Georgetown College, St. Catharine College or Shawnee State, who will battle the rest of the day in two games.

Meadows (6-4) allowed two runs (both walks) on two hits and threw 29 pitches in the first inning but then settled down, retiring 22 of the next 23 hitters heading into the bottom of the ninth. A baserunning blunder by Mid-South Conference Player of the Year Martin Lemus in the ninth probably saved the Bulldogs, as the righthander worked around an error, a single by Lemus and an intentional walk to Armando Lomeli, who collected two of the Tigers’ four hits in the contest. Pinch-hitter Trey Gross lined out to end the inning.

Meadows threw just 109 pitches in the game, by far his longest outing of the year. The Springfield, Tenn., native’s longest previous outing this season was 5.2 innings at Embry-Riddle on March 11.

Cumberland scored the winning run in the ninth thanks to a passed ball, with Richie Seaton swinging and missing strike three, but the ball bounced off the glove of Lomeli and toward the third base dugout. Seaton beat the desperation throw to first and Bryan Haney moved the runner to second with a sacrifice bunt.

Hall then ripped the first pitch from Georgetown (40-7) reliever Craig Ramsey back through the middle and Seaton scored easily when centerfielder Duran Elmore fumbled the ball.

Sam Lind made a terrific play behind the second base bag on the grounder by David Higuera to lead off the bottom of the 10th and pinch-hitter Edwin Santiago lined out to left before Elmore flew out to Seaton to end the contest.

Ramsey (5-1) suffered the loss, allowing an unearned run on two hits in two innings. Georgetown starter Tyler Arthur got no decision despite eight strong innings, giving up two runs on six hits. He walked two, struck out five and set down 17 of his final 19 batters after Lind’s RBI single in the third inning tied the contest at two.

Georgetown got on the board in the first inning thanks to walks to Justin Moore and Tyler Coker. Two-out singles from Steven Mancilla and omeli, the second one a high fly ball that fell just inside the rightfield line, plated the runs for a quick 2-0 edge for the Tigers.

The Bulldogs answered in the second inning after a leadoff double by Brady North. Josciel Veras followed with a single to center, putting runners on the corners, and Justin Byrd’s sacrifice fly to left scored North, cutting the deficit in half.

Cumberland tied the contest in the third when Haney led off with a single and pinch-runner Zach Cole went to second after Arthur’s pickoff throw to first got away. He moved to third on Hall’s fly ball to center and after a walk to Ricky Coleman, came across on Sam Lind’s single to center.

Lomeli’s one-out single to rightcenter was Georgetown’s only baserunner from the first until the ninth when Coker’s grounder up the middle went off the glove of Tyler Anderson to start the frame. Lemus followed with a bouncer through the left side and Mancelli’s fly ball took Hall all the way to the wall for the first out.

Coker made it to third easily and Hall’s throw pulled Coleman off the bag into foul territory. Lemus couldn’t decide what to do at first base and after he finally headed for second, Coleman threw a strike to second to nail the runner for a huge second out. Lomeli was intentionally walked and Gross drilled the first pitch to centerfield, with Byrd squeezing the out to end the threat and send the game to extra innings.