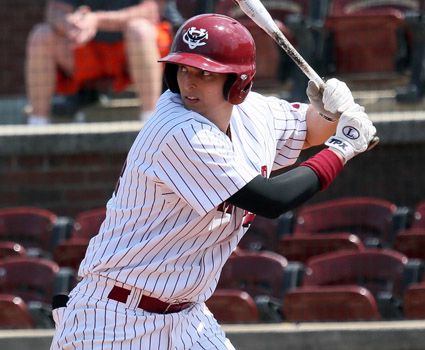 Brady North's three-run homer in the fifth inning put Cumberland ahead for good in an 8-3 win Monday over Brewton-Parker. (Credit Steve Wampler)
#23 Cumberland Univ. at #13 Brewton-Parker | May 12, 2014

KINGSPORT, Tenn. – Brady North hit a three-run homer to put 23rd-ranked Cumberland ahead for good and Jake Collier worked in-and-out of trouble for a complete game in an 8-3 victory over No. 13 Brewton-Parker here Monday at Hunter-Wright Stadium.

The Bulldogs (41-18) advance to play at 1:30 p.m. Central Time on Tuesday against the winner of the last game of the day between Missouri Baptist and Culver-Stockton.

North’s three-run homer capped a five-run fifth inning, as Cumberland trailed 3-1 after giving up three unearned runs in the fourth inning. Ricky Coleman’s single and Sam Lind’s sacrifice fly tied the game earlier in the fifth inning before North’s two-out, three-run shot to right, his 10th of the year.

CU added two more runs in the seventh, with Justin Byrd walking with the bases loaded before Tyler Anderson was hit, forcing in another run, for an 8-3 advantage.

That was enough for Collier (7-3), who won his seventh straight decision despite a very uneven performance. The righthander worked out of a bases loaded jam with no outs in the second inning and stranded the bases loaded again in the fifth inning, this time with two outs. He scattered 10 hits in the contest, walked seven and hit a batter but struck out five. The Barons (32-12) left 13 runners on base in the loss, eight in scoring position.

Chris Hall and Coleman each collected two hits and scored twice and Coleman drove in two runs. Richie Seaton also posted two hits for the Bulldogs, who improved to 18-4 since April 1.

Brewton-Parker starter Kory Brooker (8-3) took the loss, giving up five runs on eight hits in 4.1 innings. BPC used four relievers to get through the contest.

The Barons got three straight singles to start the second inning in a scoreless game, but Grayson Yeomans grounded to third, Chris Van Brandt hit a short fly ball to center and Clay Fenwick also grounded to third to end the threat.

The Bulldogs got on the board in the third inning after a one-out single to center from Hall. Coleman then ripped a double off the chalk down the leftfield line, plating Hall for a 1-0 edge.

The Barons took the lead in the fourth, taking advantage of a big error by Cumberland.

Brandon Bynam lifted a soft single down the leftfield line to start the frame and Edgar Delgado grounded to short, but Tyler Anderson’s throw to second sailed wide of the bag and rolled down the rightfield line into foul territory. Bynam scored all the way from first on the play and Delgado ended up at third. A sacrifice fly to center by Yeomans scored Delgado, but BPC wasn’t done in the inning.

Fenwick belted a 2-0 pitch just over the wall in leftfield with two outs, his first round-tripper of the season, giving the Barons a 3-1 advantage.

Cumberland answered back in the fifth, re-taking the lead with five runs on three hits, starting with a leadoff single by Seaton. Bryan Haney squared to bunt but was hit with the pitch and Hall walked, loading the bases. Coleman fought off an inside pitch for an RBI single right and Lind flied out to deep left, plating pinch-runner Zach Cole and tying the game at three.

Josciel Veras struck out against reliever Jeremy Coram but North picked up the Bulldogs, drilling a 2-1 pitch over the wall in rightfield for a three-run homer, his 10th of the season, putting CU ahead, 6-3.

Brewton-Parker tried to answer in the bottom of the inning, with Mike Parker drawing a leadoff walk before Collier retired the next two batters. Bynam singled and Delgado walked with two outs, but Yeomans struck out to end the inning with the Bulldogs still leading, 6-3.

Cumberland added two more runs in the seventh when Coleman walked with one out and Lind followed with a double down the rightfield line. With two outs North was intentionally walked, loading the bases, but Byrd drew another free pass and Anderson was hit, both forcing in runs for an 8-3 advantage.

Cumberland plays again Tuesday at 1:30 p.m. Central Time against the winner of Monday night’s contest between No. 7 Missouri Baptist and Culver-Stockton, who won earlier in the day, 4-2, over Bryan College.