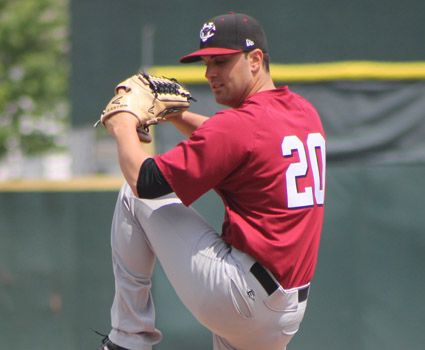 Cumberland (42-19) advances to play No. 7 Missouri Baptist at 1:30 p.m. Central Time. CU will have to beat the Spartans twice to advance to the NAIA-Avista World Series in Lewiston, Idaho. MBU defeated the Bulldogs, 5-2, on Tuesday.

Greene (9-1) had just one inning with multiple baserunners, scattering eight hits and striking out four without a walk in his longest outing of the season. The righthander retired 12 of the first 13 batters of the game and gave up three combined hits in the eighth and ninth innings after CU extended its advantage.

Veras provided all of the offense the club would need with a sacrifice fly in the third and his fourth home run of the season in the fifth inning. Coleman drove in two runs with a double and Sam Lind added an RBI single in the sixth.

Bryan (35-28) starter John Cain (2-6) allowed five earned runs on 11 hits in six innings to take the loss. The lefthander walked three and struck out two in just his second start of the season.

The Bulldogs missed a chance to take a lead in the first inning with singles from Coleman and Veras, but Brady North grounded out to end the threat.

Cumberland got on the board in the third thanks to an error by the Lions.

Bryan Haney’s hard grounder up the middle got by second baseman Cody Rhinehart into centerfield and after a groundout by Hall, Coleman’s shot up the middle was fielded by shortstop Grant Zawadski, but Rhinehart dropped the flip for a possible doubleplay, as he tried to make the throw before he caught the ball.

That opened the door for CU, as Lind drew a walk to load the bases and Veras plated the first run of the game with a line drive to deep leftcenter.

The Lions tied the game in the top of the fifth after a leadoff single to center by Rhinehart. He moved to second on Crandon Wallace’s bunt and scored when Justin Morhardt dumped a single down the leftfield line.

Cumberland regained the advantage in the bottom of the inning, as Coleman led off with a single and Veras drilled a first-pitch fastball over the wall in left, his fourth homer of the year, giving the club a 3-1 advantage.

Seaton started a rally for the Bulldogs in the sixth with a one-out single to right and with two outs, Hall dumped a short single into left. Coleman then laced a double off the base of the wall in rightfield, plating two runs, but Coleman and first baseman Kevin McMiller collided between first and second on the play, knocking the CU third baseman from the game for an inning.

Lind followed with a single to right, scoring pinch-runner Jarrett Plunkett, for a 6-1 lead. Lind lifted a high fly ball down the rightfield line that just cleared the wall in the eighth for his 14th home run of the year and the final 8-1 score.