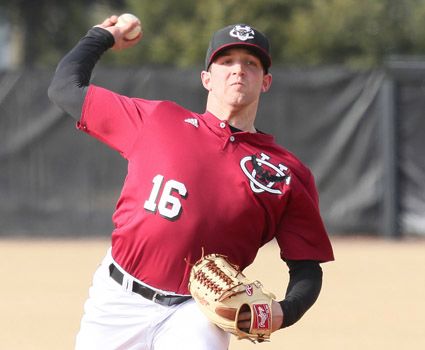 KINGSPORT, Tenn. – Clint Meadows gutted out his second straight complete game, Chris Hall collected three hits and four RBIs and Richie Seaton reached base four times and scored twice, as 23rd-ranked Cumberland survived for the second time on Wednesday with a 6-4 victory over No. 7 Missouri Baptist here at Hunter Wright Stadium in the NAIA Championship Opening Round.

With the win Cumberland (43-19) forces a second championship game in the tournament and will face Missouri Baptist for a third time in three days and fourth time this season for the right to advance to the Avista-NAIA World Series in Lewiston, Idaho.

After not pitching more than 5.2 innings in a game this season, Meadows (7-4) worked 10 innings against Georgetown College in last week’s conference tournament and tossed all nine frames versus Missouri Baptist (47-13). The righthander allowed two earned runs on eight hits, walking four and striking out three.

He did a great job of conserving pitches for most of the game, throwing more than 15 in an inning just once through the first seven frames, but the Spartans scored twice in the eighth, extending the pitch count even more. Meadows just kept firing and got a doubleplay after a leadoff walk in the ninth and then a groundout to shortstop to end the contest.

Hall posted two-run singles through the middle, both in almost the exact same spot, and Seaton plated another run with a double down the rightfield line. Sam Lind’s sacrifice fly in the first inning put the Bulldogs ahead, 1-0, early.

MBU starter Michael Yarbrough (10-1) allowed five earned runs on seven hits in 5.2 innings, walking two and striking out four to suffer the loss. Trevin Craig and Orlando Oliveira each recorded three hits for the Spartans and Joe Stropp added two hits, but the bottom four spots in the lineup went hitless in 13 at-bats for MBU.

The Bulldogs got on the board in the first inning thanks to an error, as Hall led off with a single to right and Ricky Coleman followed with a single, also to right. The ball bounced off the glove and to the right of rightfielder Craig, allowing Hall to take third on the play, and Lind’s deep fly ball to rightcenter plated the run for an early edge.

Cumberland added two more runs in the second, with everything starting on a two-out walk to Seaton. Bryan Haney followed with a double down the leftfield line and Hall’s chopper up the middle, just off the glove of a diving Jeff Smith and into centerfield, scored Seaton and pinch-runner Zach Cole for a 3-0 advantage.

The Spartans took advantage of a CU miscue for two runs in the third.

Craig reached on an infield single with one out and Coleman’s throw to first on a slow roller off the bat of Josh Fuentes pulled Brady North off the bag. Oliveira singled sharply to left, loading the bases, and after a strikeout of Eli Roundtree, Stropp singled to center, plating a pair of runs to cut the Bulldog lead to 3-2.

Cumberland left a pair on base in the fourth but added to the lead in the sixth after a leadoff single by North. Anderson singled with two outs and Seaton followed with a run-scoring double down the rightfield line.

Haney walked, loading the bases, and Hall bounced a single up the middle, again just out of the reach of a diving Smith, plating two more runs for a 6-2 advantage for the Bulldogs.

Missouri Baptist would not go away, though, and took advantage of a pair of walks in the seventh, free passes to Ryan Clarke and Fuentes. Oliveira’s triple to rightcenter plated a pair, cutting the Cumberland edge to 6-4.

The Bulldogs missed opportunities to add to the lead in the seventh and eighth innings, with North and Josciel Veras both hit to start the seventh, but Justin Byrd bounced into a 4-6-3 doubleplay to end that threat. Seaton led off the eighth with a single, but Haney’s bunt was too hard and turned into a 1-6-3 twin-killing.

In the ninth Smith led off with a walk, but pinch-hitter Enrique Pagan bounced into a 4-6-3 doubleplay on the first pitch. Craig singled up the middle, but Fuentes grounded to short and Anderson flipped to second for end the contest with Oliveira on deck.