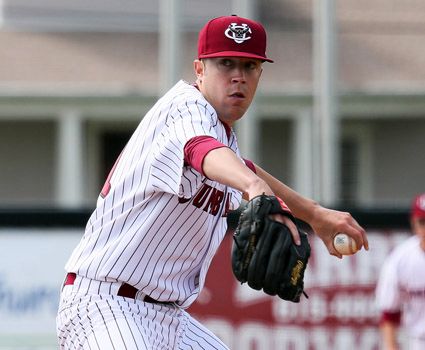 The Bulldogs (44-19) posted three straight victories after dropping a 5-2 decision to the Spartans (47-14) on Tuesday, defeating Bryan College and then Missouri Baptist on Wednesday and MBU again on Thursday. A depleted CU pitching staff was nothing short of phenomenal, allowing just nine earned runs and a 1.84 earned-run-average in the five outings.

Greene, who missed almost a month with a broken bone in his hand, did everything the club could have asked for, allowing two runs on five hits in seven innings in his first appearance since April 8. The lefthander walked one and struck out six, getting out of a pair of jams in the middle innings with double plays.

Josciel Veras, playing with a badly injured knee, doubled in the fourth scored on Seaton’s two-out single to center, and after walks to Ricky Coleman and Veras in the fifth, North drilled his second three-run homer of the tournament and 11th of the year, staking the Bulldogs to a 4-0 advantage.

The Spartans got on the board with single runs i9n the sixth and seventh, but it could have been worse, with Jeff Smith bouncing into a 6-4-3 twin-killing to end the seventh.

Cumberland added two huge insurance runs in the eighth, all with two outs. Justin Byrd and Tyler Anderson both singled to center and a wild pitch moved the runners up before Seaton drilled a double into leftcenter, stretching the lead to 6-2.

Missouri Baptist made it difficult in the ninth, with Orlando Olivera leading off with a double and Joe Stropp striking out, but the ball went through the legs of catcher Bryan Haney and runners were at first and third.

Eli Roundtree plated a run with a single to rightcenter before Brent Zimmerman’s line drive to center was the first out of the inning. Dan Harper dumped a single into short center, but Stropp did not score on the play, but it loaded the bases.

Jake Collier, who won the first game of the tournament for the Bulldogs, got a short fly ball from Smith and then struck out Eric Garcia to end the contest, sending gloves flying the beginning the celebration for Cumberland, who will make its 12th appearance in Lewiston and first since winning the 2010 national championship.

Collier earned his first save of the year and just the second for the club on the season, working two innings. He gave up one run on three hits and struck out three.