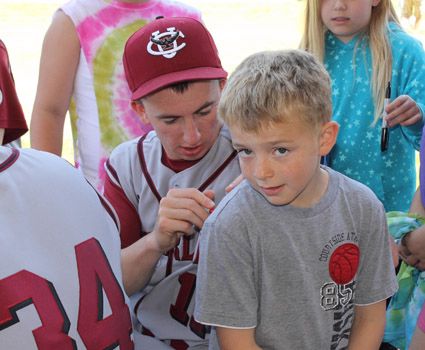 LEWISTON, Idaho – Cumberland concluded a busy Thursday here at the Avista-NAIA World Series with the team banquet at the Activities Center on the Lewis-Clark State College campus. The day also included community service at McSorley Elementary and Beacon Christian as well as practice at Harris Field and a youth clinic.

Five student-athletes went to Beacon Christian School and the remainder of the team made a trip to McSorley Elemantary School for community service that included sixth-grade students introducing players to other classes as well as the players eating lunch and signing autographs and playing a little kickball with the students on the playground.

Five other students took part in a Youth Clinic at Harris Field with players from the other nine teams and more than 200 youngsters. The annual team banquet at the LCSC Activities Center concluded the day before the action starts at the 58th Annual NAIA World Series.

The Bulldogs play at 9 p.m. Central Time on Friday against San Diego Christian College in the fourth and final game of the opening day of the tournament.