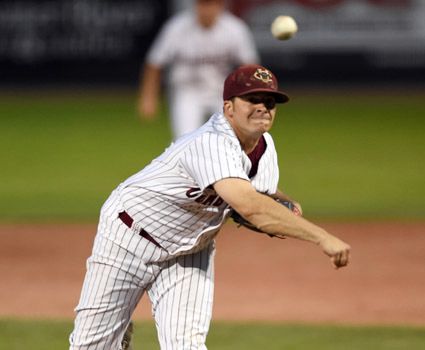 With the victory the Bulldogs (45-19) meet second-ranked and host Lewis-Clark State on Saturday night at 8:30 p.m. Central Time in a winner’s bracket game.

Cumberland got off to a great start, scoring three times in the first inning and twice more in the second, which was more than enough for Collier (9-3), who allowed just four hits with three walks and seven strikeouts.

The Hawks (42-19) loaded the bases in the second inning but Peter Hoyt flied out to end the threat. SDCC also had three runners thrown out on the base paths, with Bryan Haney picking off a runner at first base and nailing the trail runner at second on a ball in the dirt. Another runner was caught stealing as well, ending threats for San Diego Christian in the first five innings of the contest.

Lind plated a pair of runs in the first with a double and North did the same in the second, staking Collier to the early 5-0 advantage. The Bulldogs added two more runs in the fifth and seventh innings and another in the eighth, the last one on Anderson’s double to leftcenter.
Ricky Coleman and North each posted two hits and Lind and Justin Byrd each scored twice for CU.

SDCC starter Gabriel Hemmer (13-4) suffered the loss, giving up five earned runs on six hits in five innings. The righthander walked five and struck out eight, struggling with control for much of the game.

The Bulldogs started quickly, plating three runs in the first inning beginning with a leadoff single from Chris Hall off the glove of a diving shortstop Christian Johnson. Coleman doubled down the right field line, putting runners on second and third, and ind followed with a line drive double over the leftfielder’s head, scoring a pair of runs.

North then singled through the right side and Lind later came across on a wild pitch for a 3-0 edge after an inning.

In the second Bryan Haney drew a leadoff walk and pinch-runner Zach Cole moved to second on a bunt by Hall. With two outs Lind was intentionally walked and North stepped in to deliver a two-run double down the rightfield line, giving CU a 5-0 advantage.

Cumberland added two more runs in the fifth when North drew a leadoff walk and went to second on a passed ball. A ground ball to the right side by Josciel Veras went off the glove of first baseman Taylor Eichhorst, putting runners on the corners.

San Diego Christian got on the board in the seventh after a leadoff single to left by Gilbert Vierra and a walk to Eichhorst. Vierra moved to third on a deep fly ball to center from Jacob Rogers and scored on a groundout by Michael Stowers.

CU answered with two more runs in the bottom of the inning, with the club loading the bases on consecutive singles from Byrd, Anderson and Richie Seaton. With one out Hall was hit, forcing in a run, and Coleman’s groundout scored another.

Byrd was hit in the eighth, took second on a wild pitch and scored on Anderson’s double to leftcenter for the final run of the game.