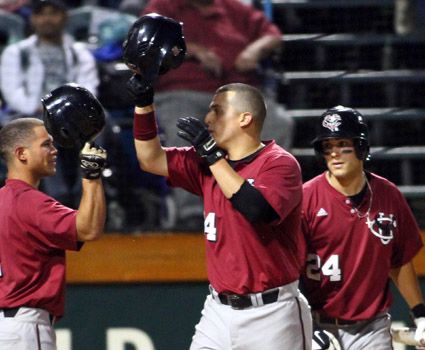 Brady North is congratulated by Josciel Veras and Justin Byrd after his solo homer in the eighth inning of CU's 6-1 victory Saturday night against Lewis-Clark. (Credit Referee Photos)
#23 Cumberland Univ. at #2 Lewis-Clark State | May 24, 2014
Related Links

The Bulldogs (46-19) scored five times in the sixth inning to take control of a scoreless game, capped by Lind’s three-run shot and Anderson’s two-run single to center. North added a solo shot in the eighth, backing an uneven but gutty performance from Gomez.

The lefthander gave up just one run on six hits, getting in-and-out of trouble in the early innings before settling down after his teammates took the lead. Gomez (6-4) walked six, tying a career-high, but struck out eight, seven of those in the final four innings. It was his first victory since April 25 versus the University of Rio Grande.

Cumberland advances to face Oklahoma Wesleyan on Monday at 8:30 p.m. Central Time. The Bulldogs defeated the Eagles, 10-5, in Lebanon on March 19 of this season.

Lewis-Clark (43-8) stranded seven runners in the first five innings, including the bases loaded in the fifth. That seemed to turn the momentum to Cumberland, who took advantage with the five-run fifth, collecting five hits in the inning off Warriors starter Mike Noteware.

He gave up five runs, two earned, on seven hits in seven innings. The righthander (6-2) walked one and struck out seven and really made just one mistake in the game on the pitch to Lind.

Ryan Sells walked for the Warriors in the fourth and Cody Weiss had a two-out single, but Ty Jackson flied out to right to end the inning.

In the fifth Tariq Staton led off with another free pass, the fourth straight inning that LC got the leadoff batter on base, and Brian Corliss doubled just inside the third base bag before another walk to Sells, loading the bases. Cody Lavalli flied out to center on a nine-pitch at-bat, ending the inning.

Bryan Haney led off the sixth inning with a single up the middle, breaking a string of 10 consecutive batters retired by Noteware. Chris Hall moved the runner to second and Ricky Coleman hit a grounder to short that took a bad hop just before it reached LC’s Mike Sexton, putting runners on the corners.

Noteware made his only mistake of the night on the next pitch, hanging a slider to Lind, who hammered a line drive over both walls of advertisements in rightfield for a three-run homer, his 15th of the season.

The Bulldogs were not done in the inning, as Brady North drove a ball to deep centerfield that LC’s Ryan Sells lost in the twilight. The ball fell on the warning track for a double and with two outs, Justin Byrd single sharply to right. The throw to the plate sailed over the first baseman’s head and Byrd never stopped running, reaching second on the play.

Anderson followed with another of his big hits this season, this one a chopper through the middle that plated both runners for a 5-0 CU advantage.

Gomez settled down after that, retiring nine of the next 10 hitters before running into trouble in the ninth. North’s solo blast to right cleared the scoreboard in the eighth for his 12th homer of the year.

In the ninth Weiss drew a leadoff walk and pinch-hitter Raymond Pedrina chopped a single to left with two outs. Jake Shirley then hit a slow roller to the right side and Gomez fell near the bag taking the toss from North. The ball fell out of his glove, allowing Weiss to score on the play, but Corliss bounced into a fielder’s choice to end the contest and give Cumberland its first-ever victory over Lewis-Clark in Lewiston and also end a three-game losing streak to the Warriors that dated to 1996.