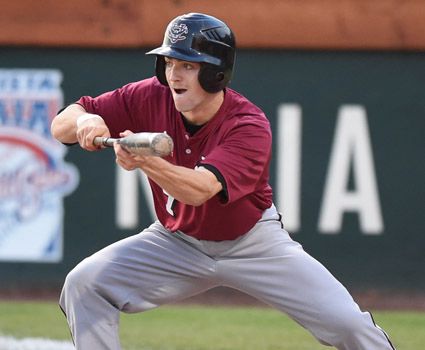 LEBANON, Tenn. – Cumberland University’s Chris Hall and Sam Lind were both voted First Team Capitol One Academic All-Americans on the College Division baseball team, as announced by the College Sports Information Directors of America (CoSIDA) this week. The Capital One Academic All-America® College Division Baseball Team is comprised of student-athletes from NAIA, Canadian and two-year institutions.

Hall and Lind were both First Team All-Mid-South Conference selections for the Bulldogs, who will play for the program’s third national championship on Friday night in Lewiston, Idaho.

Hall graduated in three years from Cumberland this month with a 3.99 grade-point-average in Accounting. The Lebanon, Tenn., native is batting .397 heading into Friday’s contest with 11 doubles, three triples, 38 RBIs and 74 runs scored from his leadoff spot. He also has 41 walks and has been hit 19 times while adding 12 stolen bases. Hall was the 2013 Mid-South Conference Freshman of the Year and a First Team All-MSC selection last season as well.

He has been tremendous for the club during the NAIA World Series, batting .545 (12-for-22) with three doubles, two homers, 12 RBIs and six runs scored. He was 4-for-5 with a double and three RBIs versus Oklahoma Baptist on Tuesday and followed that with a 5-for-5 effort with a double and a three-run home run against Lewis-Clark State on Wednesday.

Lind was a First Team All-TranSouth selection as a junior before missing the 2013 season with an injury. He holds a 3.56 GPA in graduate school in Business Administration.

About Capital One
Capital One Financial Corporation (www.capitalone.com) is a financial holding company whose subsidiaries, which include Capital One, N.A., and Capital One Bank (USA), N. A., had $206.9 billion in deposits and $289.9 billion in total assets as of September 30, 2013. Headquartered in McLean, Virginia, Capital One offers a broad spectrum of financial products and services to consumers, small businesses and commercial clients through a variety of channels. Capital One, N.A. has more than 900 branch locations primarily in New York, New Jersey, Texas, Louisiana, Maryland, Virginia and the District of Columbia. A Fortune 500 company, Capital One trades on the New York Stock Exchange under the symbol "COF" and is included in the S&P 100 index.