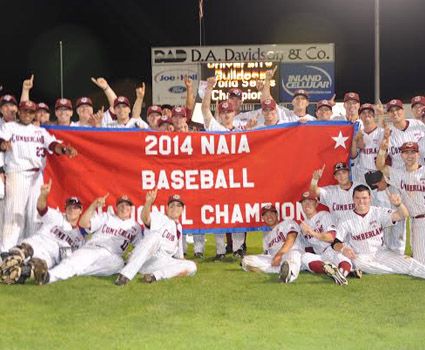 LEWISTON, Idaho – Anthony Gomez tossed a six-hit shutout and Richie Seaton’s two-run double in the second inning gave Cumberland the lead for good, as the Bulldogs claimed the third national championship in program history with a 3-0 victory over host Lewis-Clark State here Friday night in the 2014 Avista-NAIA World Series.

Cumberland (49-20) became the lowest seed (No. 10) to ever claim the national title, posting a 5-1 record en route to the championship, the third for the program since 2004.

Gomez (7-4) scattered six hits, walked three, hit a batter and struck out four, stranding 11 Lewis-Clark runners in the contest, including two each in the second, eighth and ninth and the bases loaded in the first. The lefthander defeated LCSC twice in the tournament, giving up just one unearned run on 12 hits in 18.0 innings of work.

Cumberland also left 11 runners on base, missing several chances to add to the lead, but the two runs in the second and another in the seventh on an error was enough for the victory. The Bulldogs posted a 26-6 record from April 1 until the end of the season.

The Bulldogs managed just six hits in the contest and were only 2-for-14 with runners in scoring position in the game, but Seaton’s two-run double proved to be enough for CU.

LCSC starter Ty Jackson (4-1) allowed two runs on one hit in 1.2 innings, walking three and striking out one. Two Warriors relievers – Gunnar Swanson and David Murillo – tossed 6.2 innings of relief, giving up one run on five hits with three walks and six strikeouts.

Lewis-Clark loaded the bases in the first inning on two walks and an error, but a strikeout and a groundout ended the threat. A pair of singles in the second were erased by a flyout.

Josciel Veras led off the second with a walk for the Bulldogs and after a fielder’s choice by Justin Byrd, a ball that could have been a doubleplay but bounced off the glove of LC shortstop Michael Sexton, Tyler Anderson got another free pass. Seaton then hit a line drive down the leftfield line, just past the diving attempt of Raymond Pedrina near the line. The ball rolled all the way to the wall and both runners scored on the play for a 2-0 CU lead.

Gomez settled down a bit in the middle innings, working around a pair of errors with ground ball doubleplays and retiring 14 of 17 batters from the third to seventh innings.

In the seventh Chris Hall was hit to leadoff and Sam Lind singled to left with two outs. Hall went to third on Brady North’s deep fly ball to centerfield and Veras ripped a ball through the legs of third baseman Brian Corliss, allowing Hall to score the third run of the contest.

The Warriors put a pair of runners on base in the eighth and ninth, with a single from Cody Lavalli and a double by Sexton in the eighth, but Jacob Cano flied out on the first pitch to end the inning. In the ninth Pedrina led off with a single and Jake Shirley drew a two-out walk, but third baseman Ricky Coleman threw out Corliss on a slow roller to end the game.