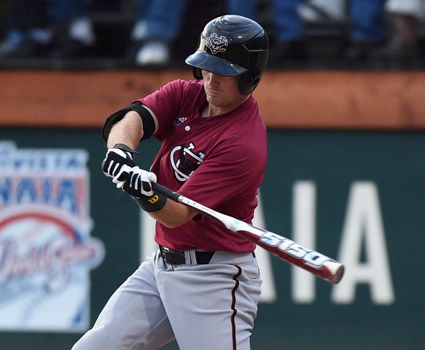 Lind batted .542 (13-for-24) with three doubles, two home runs, 12 RBIs and six runs scored in six games for the Bulldogs. He hit safely in all six outings and had at least one RBI in five of the six contests.

The Hartford, S.D., native doubled, drove in two runs and scored twice in the World Series opener versus San Diego State and belted a three-run homer in the club’s first meeting with Lewis-Clark State. Lind was 4-for-5 with a double and three RBIs against Oklahoma Baptist and collected five hits and three more RBIs in the second meeting versus Lewis-Clark. He singled and walked twice in the championship game against the Warriors as well.

Gomez was outstanding in his two appearances, tossing a pair of complete games while allowing just one unearned run on 12 hits in 18.0 innings. The lefthander tossed a six-hit shutout in the national championship game, a 3-0 versus over Lewis-Clark, and struck out 12 in his two outings. Opponents batted just .185 against the Norwalk, Calif., native.

Anderson ranked second on the club with a .455 average (10-for-22) during the tournament with three doubles, seven RBIs and a pair of runs scored. The Cocoa, Fla., native doubled, tripled and collected three hits versus San Diego Christian and posted two hits and two RBIs in the first meeting against Lewis-Clark.

He added two RBIs versus Oklahoma Wesleyan and Oklahoma Baptist, registering a pair of hits against OBU, and hit safely in all six contests during the event.

Byrd batted .360 (9-for-26) with seven runs scored and a pair of RBIs for the Bulldogs. The Rockwall, Texas, native scored a pair of runs against San Diego Christian and was 3-for-5 with a triple (he scored the tying run in the eighth) and two runs scored along with an RBI versus Oklahoma Wesleyan. He added two hits and a run scored against Oklahoma Baptist and hit safely in all six contests as well.

Coleman collected nine hits in 27 at-bats (.333) and a team-leading eight runs scored in his six outings. The Nashville, Tenn., native doubled among two hits, scored a run and drove in another versus San Diego Christian and was 3-for-5 with a run scored against Oklahoma Wesleyan. He also posted two hits with a double and one RBI and scored three times against Oklahoma Baptist before scoring twice in the second meeting with Lewis-Clark.