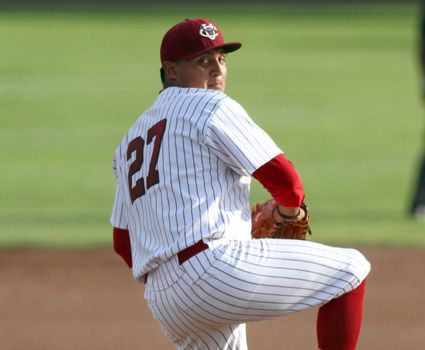 News and notes from around the Cumberland baseball program, including more history for lefthander Anthony Gomez and Sam Lind inking a professional contract.

LIND SIGNS WITH CANARIES: Bulldog infielder Sam Lind inked a contract over the weekend with the Sioux Falls [SD] Canaries in the independent American Association. He singled and scored in his first career professional game on Sunday for his home state team.

MORE HISTORY FOR GOMEZ: NAIA World Series statistician Denny Grubb emailed over the weekend with another factoid from the Bulldogs third national title. Anthony Gomez became the second pitcher in NAIA history to throw two complete-game victories against the SAME team in a Series. In 1967, Ken Lange of Glassboro State [NJ] defeated Occidental College twice, both complete games (he had three total that Series). Lange defeated the Tigers, 5-1, in the opening game of the Series and 2-1 in Game 12.

In another oddity, Lange also pitched a complete game in Game 13 of the tournament, which was played the SAME day as his second win over Occidental. In that game, Lange's Profs (short for Professors) defeated Grambling State, 2-1. Glassboro would go on and lose the next day to New Mexico Highlands, 6-1, in the championship game. Glassboro was renamed Rowan College in 1992 after Henry Rowan and his wife, Betty, gave the school $100 million, at the time the largest gift to a public college.

Gomez also tossed the first complete game in the championship game since Blake Harrison from Concordia [CA] University in a 9-3 title win over Lubbock Christian in 2011. Gomez was also the first pitcher to throw two complete games in the same World Series since 2010.

Cumberland’s 3-0 blanking of Lewis-Clark State was the first shutout in the championship game since LCSC defeated St. Ambrose University, 9-0, in the 1996 title contest.