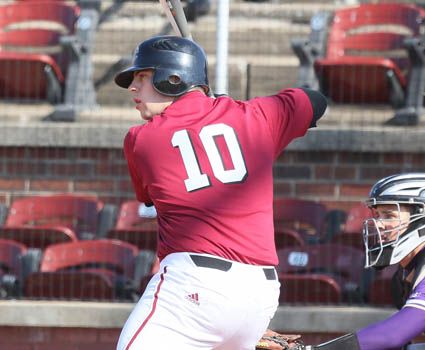 LEBANON, Tenn. – David Mullins tossed six-plus strong innings and Aaron Collazo drove in three runs, as ninth-ranked Missouri Baptist scored four times in the ninth to pull away for an 11-2 victory over No. 1 Cumberland in the Bulldogs’ season-opener Thursday at Smith-Wills Stadium in Jackson, Miss.

Cumberland plays again Friday at Noon against Culver-Stockton and concludes the opening weekend of action on Saturday against 14th-ranked Belhaven University at 3 p.m.

Mullins, who defeated the Bulldogs in the NAIA Championship Opening Round last May in Kingsport, Tenn., was strong again on the mound for the Spartans, not allowing a hit until a two-out single in the fourth from Tyler Alford. The lefthander gave up one run on five hits with one walk and seven strikeouts in 6.1 innings to pick up the victory. He retired 12 straight before Alford’s single, worked out of a bases loaded jam in the sixth with a 4-6-3 doubleplay and departed the bags full in the seventh.

Alford and Phil Stiles collected two of CU’s eight hits in the contest. The Bulldogs stranded 10 runners in the game, including two in the sixth and seventh innings and the bases loaded in the eighth.

Hector Viera’s RBI groundout in the seventh got Cumberland on the board and a line out to center in the eighth from Dakota Byrd cut the MBU lead to 7-2, but the Bulldogs bounced into an inning-ending doubleplay in the sixth and missed chances in the seventh and eighth to make it closer before the Spartans tacked on four runs in the ninth.

Stevie Smith (0-1) took the loss for CU, allowing two runs on four hits in four innings. The righthander walked three and struck out seven. Jackson White, Austin Williams and Curtis Hoppe gave up three earned runs on six hits in four innings of relief before Caleb Pitts ran into trouble in the ninth. Hoppe did not allow a hit, walked two and struck out one in his 1.2 innings of work.

Smith stranded the bases loaded in the top of the first but the Spartans finally broke through in the fourth, with the senior hitting Aaron Pangalian to start the frame. Brian Poupore followed with a single before a walk to Justin Boman loaded the bases. Austyn Nagamine’s sacrifice fly and Jeff Smith’s single up the middle gave MBU a 2-0 edge.

Orlando Oliveira reached on an error to begin the fifth inning before Eli Roundtree walked and Pangalian singled, loading the bases again. Poupore’s sac fly and Boman’s single up the middle put the Spartans ahead, 4-0.

Missouri Baptist added a run in the sixth when Nagamine led off with a double and pinch-runner Tyler Greminger crossed the plate on a pair of wild pitches.

The Bulldogs loaded the bases in the bottom of the inning on singles from Viera and Stiles as well an error, but Ryan Dickison popped up and Richard Carter bounced into a doubleplay to end the threat.

In the seventh Oliveira led off with a single and Roundtree followed with a two-run homer to right.

Ryan Simmons walked to start the bottom of the inning and Alford singled with one out before a single to center by Jarrett Plunkett loaded the bases. Viera’s groundout plated a run, but Justin Byrd struck out to end the inning.

Stiles, Dickison and Carter all singled to leadoff the eighth for the Bulldogs and Dakota Byrd’s sac fly with one out plated a run. Alford was hit, loading the bases again, but Plunkett grounded out to end the threat.

Poupore and Jared Hagely both singled in the ninth for the Spartans and Nagamine reached on a bunt single, loading the bases. Collazo’s triple to rightcenter emptied the bases and he scored on a throwing error to the plate.