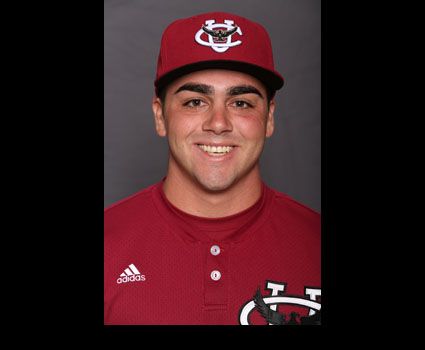 LEBANON, Tenn. – Tyler Alford and Ryan Dickison each collected two hits and Phil Stiles drove in a pair of runs, but for the second straight day No. 1 Cumberland was unable to hold the lead and had the game-tying run at third in the ninth inning, dropping a 7-6 decision to 14th-ranked Belhaven University on Saturday in Jackson, Miss.

The Bulldogs (0-3) lost all three games in Jackson, including 11-2 on Thursday to No. 9 Missouri Baptist and 7-6 to Culver-Stockton on Friday. Cumberland led 2-0 and 4-3, but the Blazers plated three runs in the fifth and seventh innings and another in the eighth, holding on for the win.

For the third consecutive day the Bulldogs stranded more than 10 runners on base as well, this time 11, including the bases loaded in the second and two apiece in the fifth and seventh innings.

Belhaven (6-1) starter Will Cockrell also lasted five innings, allowing two runs on five hits. Five Blazers relievers gave up one earned run and just four hits, with Michael Wurster (1-0) picking up the win and Chase Davidson getting the save.

Cumberland got on the board in the second inning after a leadoff double to rightcenter by Conor Dishman, who went to third on Richard Carter’s groundout. A sacrifice fly by Phil Stiles plated the run, but CU later loaded the bases with a walk to Tyler Alford, a ground ball from Jarrett Plunkett and a hit batter by Dakota Byrd, but Justin Byrd grounded out to end the inning.

In the fourth Alford doubled with one out and pinch-runner Zach Cole moved to third on a single from Plunkett. Dakota Byrd’s sac fly gave the Bulldogs a 2-0 edge.

Collier retired 12 of the first 13 batters of the contest before running into trouble in the fifth.

Adam Kowalczyk led off with a single and Dane Gecina walked before a single from Hamilton Harper loaded the bases. Joey Harris drove in a run with a single to center and two runners came across on Gabe Wilson’s groundout, giving Belhaven a 3-2 advantage.

The Bulldogs took the lead again in the seventh with a pair of runs, starting with singles from Hector Viera and Dickison. Both runners stole and the throw to second got away, allowing Viera to score on the play. Carter’s sac fly to right put CU ahead, 4-3.

The lead was short-lived, as the Blazers answered with three runs in the bottom of the inning.

Harper walked with one out and Harris followed with a single before a walk to Wilson loaded the bases. Reagan Rutledge’s sacrifice fly into foul territory down the rightfield line scored one run and Emilio DeSilva followed with a two-run single to right for a 6-4 Belhaven edge.

Both teams got a run in the eighth, with Dakota Byrd reaching on an error and moving to second on the play to start the top half of the inning for CU. Pinch-runner Orlando Collado went to third on Viera’s groundout and scored on another throwing error by the Blazers, cutting the deficit to one.

The Blazers answered right back, as Paul Pickerrell led off with a single and went to second on Hunter Sutton’s sac bunt. Kowalczyk and Gecina both walked, loading the bases, but with two outs Harris was hit by Jackson White, forcing in a run.

Cumberland had a chance to tie the game in the ninth for the second straight day, with Carter drawing a leadoff walk and scoring on a triple to leftcenter by Stiles, but Stiles was thrown out at the plate on a ground ball from Alford. Plunkett lined out and Cole was thrown out trying to steal second to end the game, sending the Bulldogs to their third straight defeat.

Cumberland plays at 23rd-ranked Tennessee Wesleyan on Wednesday at 1 p.m. before opening the home schedule with a three-game series next weekend against No. 9 Missouri Baptist.