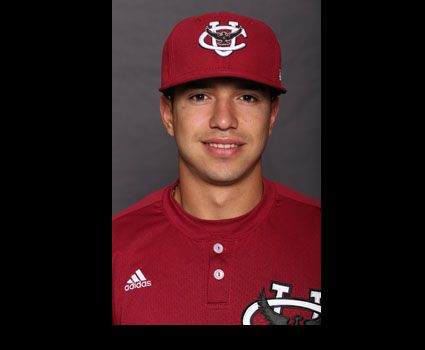 LEBANON, Tenn. – Ridge Hoopi-Haslam tripled, homered and drove in four runs and 23rd-ranked Tennessee Wesleyan scored four runs in the fifth and eighth innings, overcoming an early deficit in a 13-7 victory over No. 1 Cumberland on Wednesday in Athens, Tenn.

The Bulldogs (0-4) took a 6-2 advantage with five runs in the top of the fifth, including a bases-clearing double from Hector Viera, but Wesleyan regained the lead in the bottom of the inning thanks to three errors by CU. Hoopi-Haslam’s three-run homer in the bottom of the eighth was the final blow.

Viera finished with a pair of double and he and Justin Byrd both scored twice for Cumberland, which managed just seven hits in the game compared to 10 for TWC (3-4).

Tim Kiene added three hits and three RBIs for Wesleyan while Cody Albright (1-0) worked six innings to get the victory, giving up six runs on seven hits with two walks and six strikeouts. Three Wesleyan relievers did not allow a hit and struck out four to finish the game.

Cumberland got a run in the first when Byrd drew a leadoff walk, one of two free passes for the senior in the contest, and went to third on Viera’s double to right. Two batters later Ryan Dickison’s single to left plated Byrd.

Wesleyan tied the contest in the second on Kiene’s leadoff home run to right.

The home team added two runs in the fourth, starting with a single from Hoopi-Haslam and a double by Jordan Garrett. Kiene followed with a two-run single for a 3-1 TWC advantage.

The Bulldogs answered in the top of the fifth, with Richard Carter leadoff off with a double and moving to third on a single up the middle from Ryan Simmons. Jarrett Plunkett followed with an RBI single and after a walk to Byrd loaded the bases, Viera’s double down the leftfield line cleared the bags. A sacrifice fly from Phil Stiles gave CU a 6-2 advantage.

The wheels fell off for Cumberland defensively in the bottom of the inning, as Tyler Albert reached on an error to start the frame and two batters later Brad Carpenter was aboard on a throwing error, putting runners on second and third.

Shell McCain’s RBI single plated one run and Hoopi-Haslam’s sac fly scored another. A two-base error in leftfield off the bat of Kiene pushed across two more runs for a 7-6 lead.

Wesleyan manufactured a run in the sixth after a leadoff single from Albert, who took third on a sacrifice bunt by Phillips and scored on Carpenter’s sac fly.

In the seventh Hoopi-Haslam led off with a triple and came across on Garrett’s sac fly for an 8-6 TWC lead.

The Bulldogs cut into the deficit in the eighth thanks to a miscue by Wesleyan, with Viera reaching on an error and taking second on a groundout by Stiles. Dickison then reached on a throwing error, allowing Viera to come score on the play. Conor Dishman was also reached on an error in the inning, but a strikeout and the second pickoff of the game ended the threat.

TWC blew the game open in the bottom of the eighth with four more runs, with Albert and Phillips both hit to start the frame. Carpenter reached on a bunt single, loading the bases, and McCain’s sac fly plated one run before the three-run shot by Hoopi-Haslam.

Cumberland is scheduled to host ninth-ranked Missouri Baptist this weekend with a single game Friday at 2 p.m. and a doubleheader Saturday at Noon. Stay tuned to GoCumberlandAthletics.com for updates on the series with the impending cold weather scheduled for the area beginning Thursday.