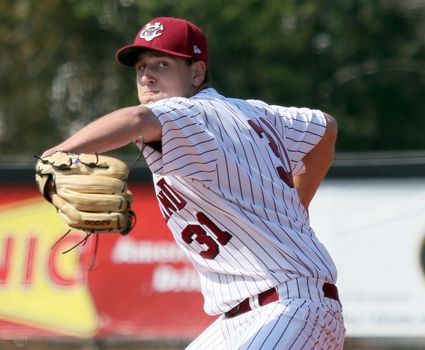 LEBANON, Tenn. – Stevie Smith struck out a career-best 12 batters in seven innings and Hector Viera and Tyler Alford each drove in a pair of runs in No. 1 Cumberland’s 5-1 victory over Freed-Hardeman on a frigid Tuesday afternoon at Ernest L. Stockton Field-Woody Hunt Stadium.

The Bulldogs (1-7) ended the second longest losing streak in the program’s 30-plus years under head coach Woody Hunt with the win. Smith finished with double-digit strikeouts for the second straight outing and limited the Lions (7-3) to just a run on two hits. More importantly the senior righthander gave up just one walk and threw only 95 pitches in his seven innings of work.

Viera plated single runs in the fifth and sixth innings with a single and a groundout and Alford provided a two-run single earlier in the sixth. Phil Stiles put the Bulldogs ahead with an RBI double in the second, scoring Orlando Collado.

Alford was the only Cumberland player with multiple hits, singling twice and raising his average to a team-best .429 through eight contests. CU managed only seven hits against FHU, all versus starter Brandon Guske (3-1), who suffered the loss. He allowed five runs with two strikeouts in five innings. Jared Humphry tossed three shutout frames of relief, striking out three.

Andrew Woodfin got the final six outs for the Bulldogs, retiring the side in order in the eighth before working around a walk and a single in the ninth to seal the win.

Cumberland struck first in the contest, with Collado reaching on a bunt single with one out in the third before Viera was hit. Stiles followed with the double down the rightfield line for a 1-0 edge.

Ryan Simmons walked to start the Bulldog fifth inning and pinch-runner Brian Conn moved to second on Collado’s sacrifice bunt. Viera then singled to center, plating Conn for a 2-0 advantage.

The Bulldogs added three more runs in the sixth, starting with a single from Justin Byrd. Ryan Dickison was hit and both runners moved up on a balk before Alford’s two-run single up the middle. Conor Dishman reached on an error and Richard Carter was hit as well before Humphry came on in relief for the Lions.

He got the first two batters out before FHU’s second error of the inning allowed pinch-runner Zach Cole to score for a 5-0 lead.

Smith retired the first nine batters of the contest before a single by Chase Young broke up the perfect game in the fourth. He was erased on a doubleplay before a walk to Argenis Salazar later in the inning.

Smith set down seven consecutive FHU hitters until a leadoff triple in the seventh by Houston Looser, who scored on Salazar’s groundout. Looser collected two of the Lions’ three hits in the contest.

In a schedule change due to weather, Cumberland will now host sixth-ranked Georgia Gwinnett on Wednesday at 2 p.m.