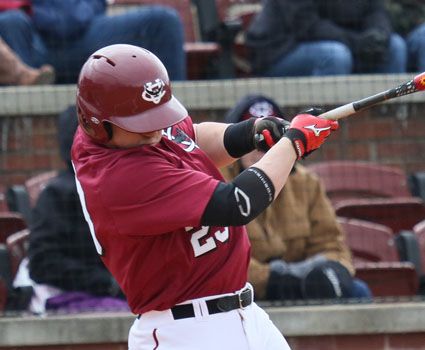 LEBANON, Tenn. – Logan Coughlin belted a two-run homer in the seventh inning for the only runs in the opening contest and Tyler Evans hit a three-run homer in the second contest, as Indiana University Southeast swept a doubleheader, 2-0 and 4-3, against No. 1 Cumberland in baseball action Saturday at Ernest L. Stockton Field-Woody Hunt Stadium.

The Bulldogs (1-9) and Grenadiers (3-2) finish the series with another twinbill Sunday beginning at Noon.

Evan Bickett tossed the final inning in the opener and worked the last 2.1 frames in the second contest, picking up saves in both games. Altogether he allowed just one hit with one walk and two strikeouts in the two outings.

IUS had just one hit entering the seventh inning in the first game against CU starter Jake Collier, but Trent Simpson led off with a single before a towering blast from Coughlin, his second homer of the year, broke the scoreless contest.

Collier (0-1) suffered the loss despite giving up just three hits with one walk and eight strikeouts. He retired 18 of the first 20 batters of the game, working around a double and a walk in the third, before giving up the single and homer in the seventh.

Cumberland managed only two hits in the game, both against Grenadiers starter Michael Fitzwater, who did not walk a batter and struck out four in five innings. Brian Nicke (1-0) walked one in his only inning of work to pick up the victory.

The Bulldogs got a run in the first inning of the second contest after a Phil Stiles triple and a sacrifice fly from Justin Byrd, but Indiana Southeast scored four times in the third inning to take the lead for good.

CU starter Stephen Fischer hit the first two batters of the third before the three-run blast from Adams, his first of the year. An RBI single later in the inning from Dayton Rausch gave the visitors a 4-1 advantage.

Cumberland scored twice in the fifth on a two-run home run by Ryan Dickison, but Bickett got the final seven outs for IUS, working around a single and a walk to finish off the sweep.

The Bulldogs managed only two baserunners in five innings against Fitzwater in the opener – a hit by pitch of Tyler Alford (which was erased when Zach Cole was caught stealing) and a two-out single and stolen base from Byrd in the fourth. Ryan Simmons started the sixth inning against Nacke and pinch-runner Brian Conn moved to second on a sac bunt by Orlando Collado, but Hector Viera flied out and Stiles grounded out to end the inning.

Byrd also walked to lead off the seventh inning but line drives by Dickison and Richard Carter along with a fielder’s choice from Alford ended the contest.

Chris Kemp’s one-out double in the third inning was the first baserunner for the Grenadiers in the contest and Marcus Howard walked with two outs before Josh Beams lined out to end the threat.

Collier struck out the side in the fourth and got six straight ground balls in the fifth and sixth innings before running into trouble in the seventh. After the single and home run, Jarret Young reached on a wild pitch after a strikeout and went to second on a sac bunt by Adams, but Alex Dapkus grounded back to the mound and Kemp flied out to end the inning.

In the second game the Bulldogs got the run in the first thanks to Stiles and Byrd and had a walk, two singles and an error in the second but still got no runs after Alford was thrown out at third after IUS shortstop Young dropped a pop-up just in the outfield grass but leftfielder Coughlin picked up the ball and got the force out at third.

Jarrett Plunkett reached on a bunt single to load the bases, but Dakota Byrd flied out and Viera struck out to end the inning.

Fischer hit Simpson and Coughlin with one out in the third before the three-run blast by Adams. Young then singled to center and moved to second on a sac bunt by Dapkus before the RBI single up the middle from Rausch made it a 4-1 game.

The Grenadiers had just two baserunners in the final four innings against CU reliever Austin Williams – a walk by Adams in the fifth and a single in the seventh from Howard. Williams tossed 4.1 innings, striking out four.

Justin Byrd doubled and Dickison walked with one out in the bottom of the third for Cumberland, but Alford flied out and Dishman struck out to end the inning.

After Dickison’s homer in the fifth, Alford and Dishman both walked, the second one by Bickett, but the righthander struck out pinch-hitter Carter to end the inning.

Dakota Byrd singled to start the sixth, but pinch-runner Collado was thrown out trying to steal second. Bickett retired the final four batters of the contest.