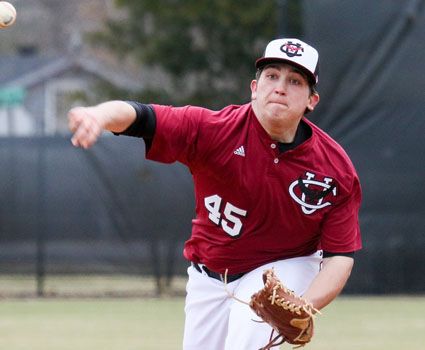 LEBANON, Tenn. – Curtis Hoppe tossed four shutout innings of relief for the victory and Nick McGrew drove home Tyler Yorko with the winning run in the 10th inning, as Cumberland claimed a 4-3 victory over Point University in the season opener for both clubs Friday in West Point, Ga.

The Phoenix and Skyhawks finish the series Saturday with a doubleheader starting at 11 a.m. Central Time.

Cumberland scored twice in the first inning and then not again until the seventh when McGrew came across on a two-out single from Gabe Lares, knotting the game at three. CU had a chance to take the lead in the ninth thanks to a single from McGrew, a hit pitch by Kyle Allen and a walk to Lares, loading the bases with one out, but Hector Viera bounced into an inning-ending, 6-4-3 doubleplay.

The Phoenix came back in the 10th, with Yorko singling with one out and stealing second. Jarrett Plunkett walked before McGrew’s single through the right side, plating Yorko with the winning run.

Hoppe did the rest, striking out the first two batters in the bottom of the inning before a fly ball to leftcenter ended the contest. The righthander allowed two hits, did not walk a batter and struck out seven in relief of starter Mike Melendez.

Melendez worked around two errors and a pair of unearned runs in six innings, giving up four hits with two walks and five strikeouts.

Josh Nestlehutt tossed seven strong innings for Point but also got no decision, allowing one earned run on eight hits with no walks and six strikeouts. Ti Inlow suffered the loss, giving up one run on three hits with two walks and two strikeouts in 2.2 innings.

Each team scored twice in the first inning, with Lares and Viera both singling to start the game, but Josh Croft grounded into a doubleplay. Yorko reached on a throwing error by Nathan Greene, allowing one run to come across, and Ryan Dickison’s single plated Yorko for an early CU lead.

Riliani Familia doubled to leadoff the bottom of the inning for the Skyhawks and Jay reached on an error by Dickison in rightfield, allowing Familia to score. Jay went to third on the play and knotted the game at two on a sacrifice fly by Christian Cabral.

Point took the lead in the third when Greene started the frame with a double and scored on Jay’s one-out single to left. The Skyhawks had just one baserunner reach second base the rest of the game and that came in the ninth after singles from Jay and Juan Reyes, but Hoppe got a fly out and a strikeout to send the contest to extra innings.