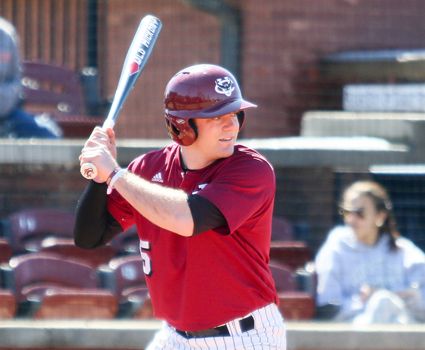 LEBANON, Tenn. – Cumberland scored eight times in the second inning, taking advantage of six walks, an error and one hit batter, en route to a 10-2 victory in the second game, splitting a doubleheader against Point University on Saturday in West Point, Ga.

The Phoenix lost the opener, 3-2, but took 2-of-3 from the Skyhawks to open the season for both teams.

Five walks and a hit batter preceded an RBI single from Nick McGrew and a sacrifice fly by Josh Croft. Another run came across on a ground ball by Tyler Yorko as well as a sac fly from Mitch Langer. Ryan Simmons’ two-run single finished the frame, giving CU the early lead.

That was more than enough for Stephen Fischer (1-0), who allowed two runs on five hits in seven innings of work. The righthander walked one and struck out five for the win, ending a personal three-game losing streak that dated to the end of last season.

Simmons went 2-for-3 with a run scored and three RBIs in the contest and Jarrett Plunkett scored three times for Cumberland.

The Phoenix dropped the opener, 3-2, with the Skyhawks scoring a pair of unearned runs in the sixth to take the lead.

Cumberland loaded the bases with one out in the seventh after a pinch-hit double from Yorko, a single by Gabe Lares and a walk to Croft, but Ryan Dickison lined into a game-ending doubleplay.

Joshua Mollett (0-1) suffered the loss for CU, giving up three runs, one earned, on six hits. The righthander walked two and struck out four and fell victim to his own throwing error that started the two-run sixth inning for Point.

Cumberland stranded eight runners in the contest, one in every inning but the first and two in the fifth and seventh. CU also managed just four hits in the contest.

Point starter Dylan Griffin allowed two runs on two hits with four walks and 10 strikeouts in five innings of work. Ty Plumley (1-0) picked up the win with one inning of relief, striking out one, and Payne Kosobucki worked out of his own jam to earn the save in the seventh.

McGrew’s solo homer with two outs in the second put the Phoenix ahead and CU added to the lead in the fifth when Phil Stiles drew a leadoff walk and Kyle Allen moved the runner to second with a sacrifice bunt. Lares was hit and after a strikeout, Croft’s single through the right side gave the Phoenix a 2-0 edge.

After giving up two singles in the first, Mollett retired nine of the next 11 batters before running into trouble in the bottom of the fifth.

Omar Smith drew a leadoff walk and went to second on Taylor Harper’s sac bunt. Calvin Jimenez then doubled down the leftfield line, cutting the CU lead in half.

In the sixth Riliani Familia reached on a one-out throwing error by Mollett and Juan Reyes’ single put runners on the corners. Familia scored on a wild pitch to tie the game and with two outs, Harper singled off CU reliever Sam Patton to drive in the eventual game-winning run.

In the second inning of the second game, Plunkett and Dickison both walked to start the frame and Simmons was hit before Grant House also drew a free pass, forcing in a run and prompting a pitching change for the Skyhawks.

Lares walked against reliever Jesse Ford for another run. McGrew followed with the RBI single and Croft had the sac fly before Lares scored on Yorko’s ground ball and McGrew came across Langer’s sac fly.

Plunkett and Dickison both walked again later in the inning before the two-run single from Simmons finished the scoring in the frame.

Cumberland added a run in the third when McGrew was hit with one out, went to second on a wild pitch and scored on Langer’s two-out single through the left side.

Point plated two runs in the fourth starting with a double by Blake Lorow. Smith then tripled down the rightfield line and Jimenez’ groundout drove home the final run of the contest for the Skyhawks.

Cumberland added its final run in the sixth when Plunkett doubled down the leftfield line and scored on a single up the middle from Simmons.

The Phoenix host Madonna University in a three-game series beginning next Saturday at Noon at Ernest L. Stockton Field-Woody Hunt Stadium. That series starts a 12-game homestand for CU and is the first of six straight weekends at home.