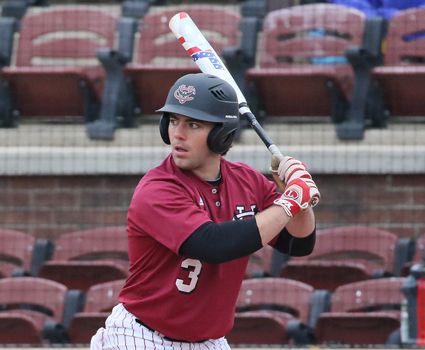 Richard Carter's two-run homer got Cumberland on the board in Wednesday's 5-3 win over Brescia. (Credit Steve Wampler)
Brescia Univ. at Cumberland Univ. | February 17, 2016

LEBANON, Tenn. – Richard Carter hit a two-run homer and Nick McGrew drove in a pair of runs, as Cumberland overcame an early deficit to post a 5-3 victory over Brescia University in baseball action Wednesday on a cold and blustery day at Ernest L. Stockton Field-Woody Hunt Stadium.

Cumberland (4-3) fell behind 3-0 after the Bearcats (0-4) scored twice in the second and once in the fourth, but Carter’s two-run blast in the bottom of the fourth cut the deficit to 3-2. McGrew’s two-run double in the fifth gave CU the lead for good and Tyler Yorko’s double later in the inning plated McGrew with the final run of the game.

Cumberland starter Drew Chester (1-0) tossed a career-best 5.2 innings for the win, allowing three runs on eight hits. The righthander walked two and struck out six, working around baserunners in every inning but stranding six Bearcats while in the contest.

Sean Cruz worked 3.1 scoreless frames for the save for CU, giving up two hits with a walk and one strikeout.

Cumberland managed only six hits in the contest but stranded eight thanks to five walks and a hit batter from Bearcats hurlers. Brescia, on the other hand, banged out 10 hits but also left eight runners on base.

The Bearcats struck first in the contest with two runs in the second, starting with consecutive one-out singles from Logan Wilkerson and Kenny Rideout. Both players moved up on a wild pitch before Wilkerson came across on a groundout by Colton Hurt and a two-out infield single from JaQuan Jones plated Rideout.

Brescia added a run in the fourth when Wilkerson doubled to leftcenter to start the frame and scored on a two-out single to left by Jones for a 3-0 advantage.

Cumberland managed just a single and a walk against Solomon in the first three innings before finally breaking through in the fourth.

Josh Croft led off with a walk and scored on Carter’s one-out homer to right, his first of the season.

Kyle Allen doubled to start the fifth inning for the Phoenix and Gabe Lares followed with a walk. Both runners scored on McGrew’s double to leftcenter. Two batters later Yorko doubled down the leftfield line for a 5-3 Cumberland lead.

Brescia threatened in the seventh when Josh Wetzel led off with a single and Zach Johnson walked, but Shawn Callis bounced into a 6-4-3 doubleplay and Reed Rounder struck out to end the inning.